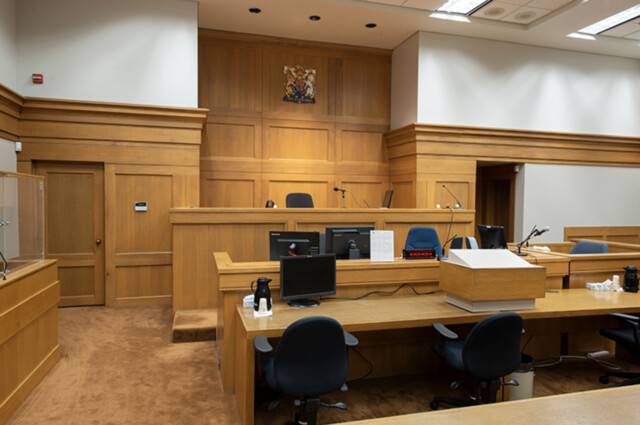 Photo: BC Provincial Courts.
"He has written and said horrible things," the defence lawyer said.

Judge Roger Cutler sentenced Craig Millian Majorki, 45, to time served and two years' probation after he pleaded guilty to three counts of criminal harassment and for spitting on a Saanich police officer trying to arrest him amid a torrent of “profane, derisive, homophobic and racist comments.”

The man, who has been ill much of his life and has endured more than 100 surgeries, was credited 32 days in jail before the pleas were entered. He attended court via video from his parents’ Victoria home.

But for mitigating circumstances, Cutler said the “abhorrent actions” and resulting trauma could attract “a lengthy period of incarceration.”

The judge warned Majorki he would go to jail if there is a next time.

“I hope you're finding some means to control your volatility,” Cutler said.

The attacks on the family

Sprackman had been Majorki’s lawyer on other matters, the court heard, and the abuse began after he withdrew.

Between September 2020 and February 2021, Sprackman received more than 200 threatening emails from Majorki. The phone would ring at all hours of the night; it got to the point where the family had to unplug their phones, leaving them in fear of not getting calls about elderly relatives.

Majorki went as far as unearthing wife Jodi's work number and using it to harass the family, the court heard.

Majorki also posted bad reviews of Sprackman online, a situation the lawyer said has damaged his law practice and income.

Majorki further falsely claimed online that Sprackman’s wife was having an affair and the lawyer had an inappropriate relationship with his daughter.

The court also heard Majorki had used a website to make prank calls to Sprackman.

In a victim impact statement, Sprackman detailed “the carnage his behaviour created.” He called the attacks “relentless,” done from afar by a keyboard warrior.”

Cutler agreed, saying the attacks were made “in the most cowardly way.”

“He set about to attack the things that were most important to me,” Sprackman said.

In her victim impact statement, Jodi noted Majorki called when her mother passed away.

"'I'm glad that bitch kicked the bucket,'" she recalled Majorki saying on the phone. "[He] mocked me in the throes of my grief."

“It was a never-ending barrage,” she said, explaining calls to the landline would be followed by calls to a cell.

The family would “stay awake all night waiting for the next call,” she said. “It was all Craig Majorki, all the time.”

Jodi told the court the situation was a “very real reminder” of the dangers Jews continue to face.

Daughter Camille said in her victim impact statement she was disgusted and horrified by the attacks. She said it made her afraid to say she is Jewish.

“[He] has made me feel unsafe in my own home,” she said. “I feel angry and frustrated that he has been allowed to continue his behaviour with very littler consequences.”

Asked if he had anything to say, Majorki said, “I’m just very sorry.”

Majorki’s lawyer Troy Anderson said his client has apologized to Jodi and Camille.

“His quarrel was never with them,” he said.

Once Majorki heard the victim impact statements, Anderson said, the penny dropped for him that he had truly harmed innocent people.

“He has written and said horrible things,” the defence lawyer said. “When he feels he is not being listened to, he lashes out.”

Anderson said his client has had problems finding a psychiatrist to treat him.

Part of Majorki’s conditions include being supervised by a parent when using a computer.

The judge said if Majorki sends one wrong tweet or Facebook post during that prohibition period, “the police are going to be at his door and he is going to be in a cell.”

Johnson and Majorki had been texting on a matter until it devolved into “a barrage of insulting messages,” Crown prosecutor Kevin Westell told Cutler.