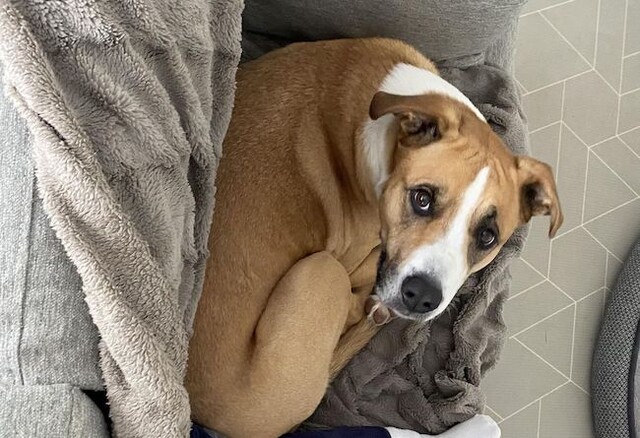 The owners of a missing dog are desperately searching for their pet after it was struck by a vehicle in the Silver Star area near Vernon over the weekend.

Alysha Taylor's Facebook post has been shared more than 1,000 times and hundreds of comments and reactions made since her dog Winston was hit by a truck in the Keddleston area off Silver Star Road.

"He's running scared after being hit by a truck. He headed North off of McLennan Road. We are unsure of the extent of his injuries, but do know he is hurt as there is a blood trail. We are currently out looking but haven't had any luck," Taylor posted on the Vernon BC, Lost and Found Pets page Saturday afternoon.

Taylor says she and her husband and son watched the incident happen at the end of their driveway.

"We are doing absolutely everything we can to bring him home," she wrote.

On Sunday, Taylor updated to say they are still looking for Winston.

"Still looking for our boy. My husband found two separate beds in the snow where he thinks he was last night (logging road off Keddleston), but after the second one no tracks. Hoping he decided to turn back."

Later, Taylor said they had followed Winston's tracks to the end of the logging road, "straight up the hill until it got dark. At 7 p.m., someone reached out thinking they may have seen him on the downhill side of McLennan Road.

"We were out for another two and half hours, but no luck.

"Holding on to any bit of hope we can that our sweet boy makes it home. Very grateful for everyone that has been sharing and keeping those positive thoughts going for us!"

"He doesn't have his collar on, but does have a microchip in the scruff of his neck," she says.