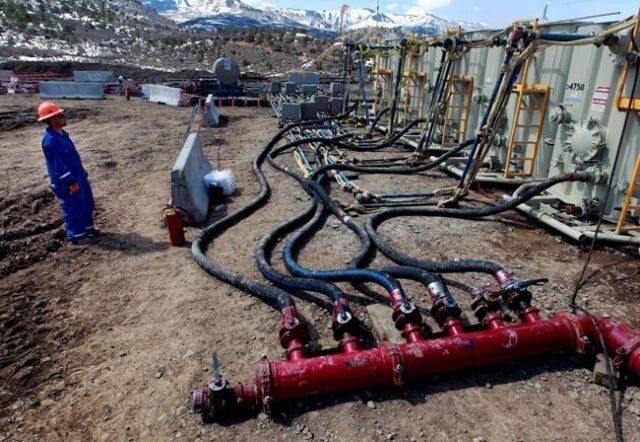 The study, released by the environmental group Stand.earth this week, points to data from the B.C. Oil and Gas Commission (BCOGC) which shows that by the end of 2021, 30 oil and gas companies were withdrawing water from 113 locations across the province.

Altogether, the industry used roughly 5.2 billion litres of water, most of which was injected underground with chemicals and sand during the high-pressure hydraulic injection process but also for washing equipment, to freeze winter ice roads, for dust control, for drilling wells and for hydrostatic testing of pipelines, notes the BCOGC.

"After the fracking process is complete, the wastewater that returns to the surface is so toxic it cannot be returned to the water cycle without treatment, a process which is currently not used in B.C.," the report says.

Instead, it's pumped into disposal wells, where it sits permanently removed from the water cycle in a process that has been shown to trigger earthquakes, says Stand.earth.

A spokesperson from the Ministry of Energy, Mines and Low Carbon Innovation declined to comment, telling Glacier Media it was still reviewing the report.

At a rate of $2.25 per million litres of water, the fracking industry paid less than $8,000 in water rent, according to the analysis carried out by the group's oil and gas program director Sven Biggs. That doesn't include application fees, ranging from $1,000 to $10,000.

The report says annual freshwater extraction by the oil and gas industry could double to 10.4 billion litres should all five liquified natural gas terminals currently under consideration in B.C. be approved.

Stand.earth is calling on the B.C. government to consider water used in fracking as hazardous waste that requires treatment in industrial wastewater facilities. Such a move, it claims, would encourage the reuse of water.

The environmental group says the government could better protect groundwater aquifers from leaking disposal wells if it carried out more regular testing and monitoring and aligned its regulations with the Environmental Protection Agency in the U.S.

The report also calls on the B.C. government to end oil and gas companies' "special treatment" under the Water Act, which it says currently authorizes the B.C. Oil and Gas Commission to authorize water licences with no volume limits.

"All other water users, including farmers, local governments, and even BC Hydro, have to go through the regular processes and expenses before they can access water licences or approvals," notes the report.

Reached for comment, a spokesperson for the BC Oil and Gas Commission pointed to a statement on its website indicating that at the end of the third quarter, "actual water use by the oil and gas industry in 2022 was a fraction of a per cent (0.003) of the average runoff replenished annually in northeast B.C."

A statement on the commission's website continued: "All oil and gas water use applications are thoroughly reviewed to make informed water allocation decisions and ensure the protection of environmental flows for fish, future water supplies for communities, and can be rescinded in times of drought, which was done several times this year through directives."

The spokesperson said the Commission was still reviewing the report.

One solution, says Stand.earth, is to return the ability to issue water licences and permits to the Ministry of Environment and Climate Change Strategy's Water Stewardship Branch.

The group is also asking the province to increase the cost of freshwater going to fracking companies — that way, claims Stand.earth, oil and gas companies will be more likely to conserve it.