Kalamalka Weavers and Spinners have been in Vernon since 1972 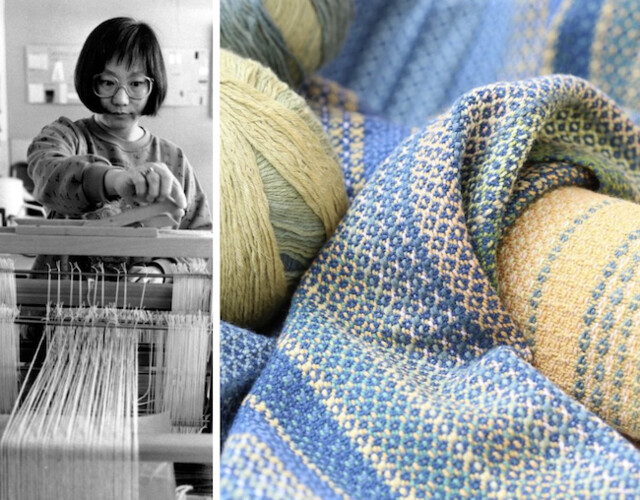 Photo: Contributed
Sandra Jung, a member of the Kalamalka Weavers and Spinners Guild, in 1991. Examples of the guild?s textile creations for sale at Artsolutely.

One local organization that is keeping an ancient tradition alive is the Kalamalka Weavers and Spinners.

The guild was formed in Vernon in 1972 with the goal of promoting weaving and spinning, crafts which are acknowledged as among the oldest in the world.

They can be traced back to the Neolithic Period, when plant fibres where twisted together to create string. This progressed to the use of stones and sticks to wind the twine, and then to the first spindles roughly 7,000 years ago.

While the Kalamalka Weavers and Spinners mainly focus on fibre creations, including those produced through knitting, crocheting, dying, and felting, in the 1970s some members were also avid basket weavers.

The baskets were made from locally-harvested ponderosa pine needles that were bunched together and held together with raffia from Madagascar. One former president of the guild, Bea Sworder, described basketry as “one of nature’s gifts to mankind.”

The members of the guild who took up this craft were modelling their creations off of the traditions of Indigenous communities in B.C., who created — and continue to create — baskets using a variety of natural materials, including pine needles, birch bark, and cedar roots.

It was a Secwepemc Elder, Dr. Mary Thomas, who first taught the group how to basket weave in the mid-1970s. Thomas was a celebrated ethnobotanist, and an advocate for the protection and promotion of Indigenous language, culture, and traditions. She hosted several workshops for the guild, and was selfless in her willingness to share the teachings of her own Elders.

The more recent history of the Kalamalka Weavers and Spinners is one of ongoing passion and success. In September of this year, a team from the guild placed second at the Sheep to Shawl competition of the Salmon Arm Fall Fair, and they are aiming for first place in next year’s event. You can find some of their beautiful creations, alongside those of other talented local artisans, at the Vernon Community Art Centre’s Artsolutely.