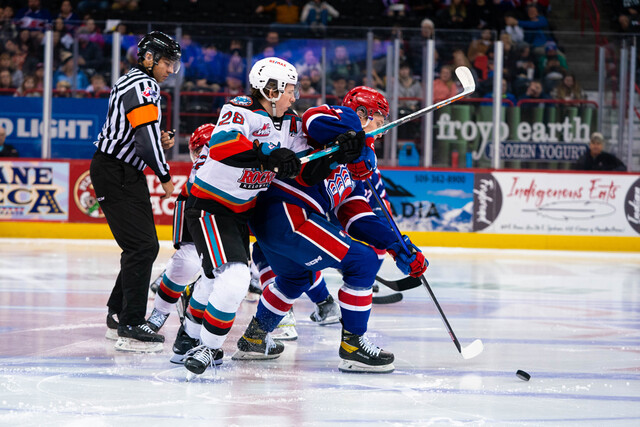 The Kelowna Rockets threw everything they had at Spokane Chiefs goaltender Dawson Cowan in the final period.

But, in the end, it wasn't quite enough in a 2-1 defeat at the hands of the hometown Chiefs Friday.

Cowan turned aside 43 shots, including all 19 he faced during a frantic final 20 minutes.

All the scoring in this one came in the middle stanza.

After a scoreless first, the Chiefs built up a two goal lead with goals three-and-a-half minutes apart.

Ty Cheveldayoff and Saige Weinstein got pucks past Jari Kykkanen before the midway point of the second to give the Chiefs a 2-0 lead.

Elias Carmichael cut the lead in half minutes later. The Rockets turned the puck over in the neutral zone sending rookie Logan Peskett away down the left wing.

He dropped the puck to Carmichael who beat Cowan from the left circle.

It was the only puck to beat the Chiefs netminder.

The Rockets, who have lost two in a row, will play in Tri-City Saturday before closing the trip Sunday in Everett.