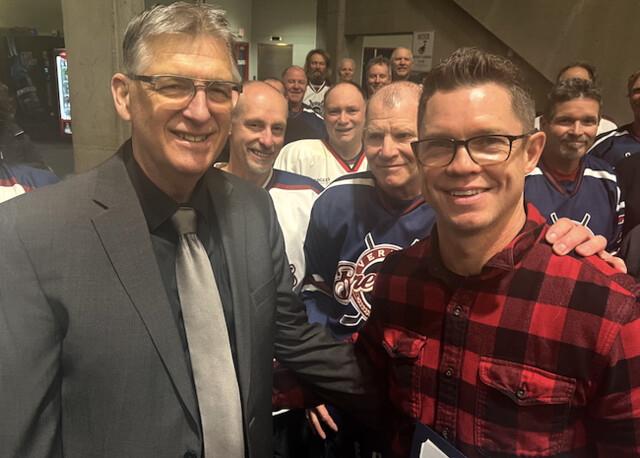 Jonny Rockall says he is no hero.

And so does the BC Emergency Health Services who presented Rockall with the Vital Link Award Friday for saving Winther's life.

A ceremony was held at Vernon's Kal Tire Place, only a few metres from where Rockall's life-saving actions were performed.

Rockall, a City of Vernon employee, was working at the arena and rushed over to assist when he was told Winther was unconscious.

Other players had already called 911 and brought over an automated external defibrillator (AED).

Even though he had never performed CPR in a real-life situation, Rockall, who was trained as a Vernon volunteer firefighter, knew what to do when he found Winther in cardiac arrest.

He used the AED and continued CPR until firefighters and paramedics arrived. Winther was rushed to Vernon Jubilee Hospital and later transferred to Kelowna General Hospital.

“I don't feel like a hero, that's for sure,” said Rockall who admitted to being somewhat overwhelmed by all the attention.

“I had never met Alan before, I just knew he needed help. It couldn't have worked out better.”

Since that fateful day, the two have become fast friends and meet and talk on a regular basis.

“I am very thankful for him being there and his training, he's just a great guy, love him,” Winthers said.

Winther said he is also “so thankful” for the support of his former teammates, who attended the ceremony before taking to the ice.

He also had high praise for the paramedics and hospital staff.

“They were fantastic. We hear a lot of negative things about our health-care system, but I felt I got world-class care,” said Winther.

Fiona Morgenthaler-Code was the first paramedic on scene and she said without Rockall's quick actions, the outcome could have been tragic.

“Without Jonny and the teammate's actions, so quickly from the time of the event to the time we got there it could have possibly been a totally different outcome,” said Morgenthaler-Code who is also the chief of the Coldstream Fire Department.

Winther, Rockall and Morgenthaler-Code all encourage anyone who is able, to learn CPR.