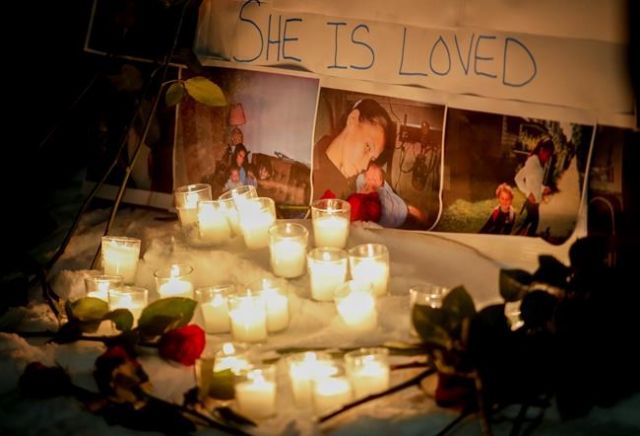 Photo: The Canadian Press
A vigil with photos of Morgan Harris attached is shown as family and friends of three murdered women gather at a vigil in Winnipeg, Thursday, December 1, 2022. It was announced that Jeremy Skibicki faces three more charges of first-degree murder. In addition to Rebecca Contois, who was identified earlier, Skibicki has been charged in the deaths of Morgan Beatrice Harris, Marcedes Myran and an unidentified woman. THE CANADIAN PRESS/John Woods

The arrest of a man accused of killing four women, all believed to be Indigenous, shows vulnerable women and girls are subject to dangerous outcomes if governments don't work together to end gender and race-based violence, Indigenous advocates say.

Several Indigenous groups are urging governments and other institutions in power to fulfil the 231 Calls for Justice outlined in the final report from the National Inquiry into Missing and Murdered Indigenous Women and Girls, released in 2019.

"The political will of all levels of government is required to end this ongoing genocide," the National Family and Survivors Circle said in a statement Friday.

The group said Indigenous women are disproportionate victims of violence in Canada due to "unchecked racism and misogyny."

Winnipeg police on Thursday charged Jeremy Skibicki, 35, with first-degree murder in the deaths of Morgan Harris, 39, Marcedes Myran, 26, and an unidentified woman. Their bodies have not been found.

Skibicki was taken into custody and charged May 18 with first-degree murder in the death of Rebecca Contois, 24. Her partial remains were found in a garbage bin near an apartment building and police later found the rest of her remains in a Winnipeg landfill.

Contois, Harris and Myran are First Nations and police said they believe the fourth victim is Indigenous as well.

Skibicki appeared briefly in court Friday, his head shaved and sporting a long beard. He kept his gaze forward as he walked by some family members and their supporters in the courtroom. Skibicki said "correct" when the judge said his name and asked him confirm his identity.

Skibicki did not enter a plea, but his lawyer said he maintains his innocence and a trial is likely some time away.

"We just received 10 terabytes today of disclosure and that's probably not all there is to it," Leonard Tailleur told reporters outside the courthouse.

The Crown is proceeding by direct indictment, which means there will be no preliminary hearing. Skibicki remains in jail.

The Native Women's Association of Canada said the deaths of the four women show more action is needed across the country.

"They explain why the government cannot just hold an inquiry and say 'job done.' The inquiry was just the first step. Now it is time for serious action," the association said in a written statement.

The national inquiry called the murders and disappearances of Indigenous women genocide in it's final report.

The federal government released its national action plan last year, on the second anniversary of the release of the final report, which some criticized because of its lack of devoted funding, timelines or measurable goals.

The Native Women's Association released its own report card on the government's progressearlier this year and found little progress had been achieved.

Grand Chief Cathy Merrick with the Assembly of Manitoba Chiefs echoed calls for the federal and provincial governments to work with police to implement the national inquiry's recommendations aimed at tackling root causes of violence against Indigenous women and girls.

"We must work together to honour the 231 Calls to Justice and act immediately," she said in a news release.

The family advocate for the Assembly of Manitoba Chiefs said First Nations women are being failed.

"We continue to witness the vulnerability of our unsheltered women," Cora Morgan said in statement.

Crown-Indigenous Relations Minister Marc Miller said the federal government is failing in its responsibility to protect Indigenous women and girls, despite allocating money toward the issue.

Miller said he was shocked to learn Winnipeg police charged Skibicki with killing the four women.

"It's a legacy of a devastating history that has reverberations today," he said. "No one can stand in front of you with confidence to say that this won't happen again, and I think that's kind of shameful."

Police said Harris, Myran and Contois were killed in May. The unidentified victim is thought to have been killed on or about March 15. Police released a photo of a jacket similar to one she had been wearing.

Winnipeg has often been referred to as ground zero or the epicentre of the crisis of violence against Indigenous women and girls.

Miller said the federal government will continue to work to address some of the systemic issues that put Indigenous women in vulnerable situations, including reforming the child-welfare system and opening more shelters.

"The federal government has a responsibility … despite the investments that we've put in — and they're significant," he said. "We are trailing in the face of a tragedy."