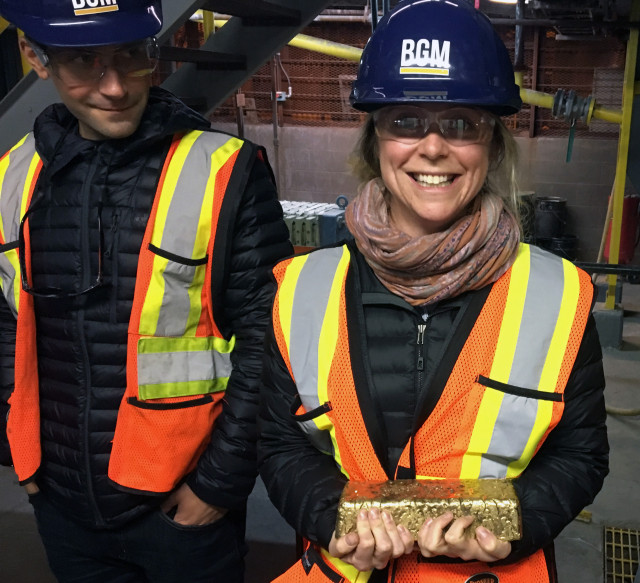 Photo: .
Barkerville Gold Mine geologist Maggie Layman holds a gold brick worth about $967,000. The brick was produced from the Bonanza Ledge underground mine on Barkerville Mountain.

Feeling the dead weight of a solid gold brick in her hands, it was hard for geologist Maggie Layman to contain her excitement.

That 12.4-kilogram (400 troy ounce) gleaming piece of precious metal produced from the Bonanza Ledge underground mine on Barkerville Mountain was a hint of much more to come for Layman in her work developing the neighbouring Cariboo Gold project near Wells, B.C.

“It is really special to see a project go from soil and rock samples to full gold bricks,” said Layman. “I’m very excited for the future.

“It’s always the best part of the job, the most fun part of it, to get those nice pieces of gold.”

And there’s plenty more to be dug from the area that spawned the Cariboo Gold Rush.

Layman is this year’s recipient of the Association of Mineral Exploration H.H. ‘Spud’ Huestis Award for her work developing the geological model that defined 4.3 million ounces in new underground deposits that make up the Cariboo Gold project.

“We’re doing a feasibility study right now which will show the economic potential once we account for development costs, mining costs, how much it costs to produce the gold in the mill and do the floatation process and concentrating it,” said Layman.

Layman works for Montreal-based Osisko Development Corp. and its Barkerville Gold Mines division as a drill geologist and exploration manager and she’s leading the project to create a second underground gold mine in the area using the town of Wells as its operational base. In 2021, Osisko partnered with the Lhtako Dené First Nation to add a second phase to its Bonanza Ledge project on Barkerville Mountain.

“It’s such a big part of the history of British Columbia, the Cariboo Gold Rush that started in the 1860s and placer mining and development is what made B.C. part of Canada,” said Layman.

Layman estimates only about 10 per cent of the property has been drill tested in an area of surface gold showings that stretches for 86 kilometres. Some of the drilling has been close to historic placer and hard rock mines that produced several million ounces of gold in the Barkerville starting in 1860.

The U.S. Geological Survey estimates all the gold so far discovered in the world (mined and unmined) would fit into a cube 23 metres wide of each side and would weigh 244,000 tonnes.

After years of surface mapping and accessing existing underground studies, the Barkerville Gold Mines technical team gained an understanding of the geologic model and what was controlling mineralization in the area. Diamond drilling commenced in 2017 and for four years the company utilized eight-12 drill rigs which produced 700,000 metres of core samples.

The Cariboo Gold mineralization is hosted in quartz veins buried under sandstone and is not difficult to extract. They’ve drilled as deep as 700 metres but the average depth of mineralization is 350 m along a strike length of about six km over a width of one km.

The deposit is immediately south of the town of Wells in a valley that encompasses Cow Mountain, Barkerville Mountain and Island Mountain. The first gold discovery in the area was in 1858 and during the Cariboo Gold Rush from 1860-70, there was about three million ounces produced. From 1933 to the late-1980s, another 1.5 million ounces was extracted from an underground mine near Barkerville.

The $433 million Cariboo Gold project still has to go through an environmental assessment permitting process before a mine can be approved. Provided they clear all hurdles, Osisko hopes to have the mine under construction in 2024. To reach the gold deposits the company plans to use electric-powered roadheader rock cutters on tracks, which will maximize production and minimizes mining emissions. Once operational, the mine is expected to produce for 16 years and provide full-time jobs for 500 people.

“Prince George, Quesnel and surrounding areas do stand to benefit from the future of having a mine in that area – from the suppliers we use, any vendors, consultants, contractors, environmental personnel, engineers. geologists and technicians. Barkerville Gold Mines/Osisko Development have put forward training  programs to work with the (College of New Caledonia) in Prince George to ensure there’s a future dedicated and fully-trained workforce of local people that can benefit from this project.”

Originally from St. John’s, Nfld., Layman has spent eight of her 18-year career as a geologist working on the Cariboo Gold project, where she’s got to know the people of Wells and the 218 people who live in the mining town 180 km southeast of Prince George.

“I love working in British Columba and love the Wells/Barkerville area - it’s been so great to work with so many great people locally and in the province,” said Layman. “We’ve had such an amazing technical team that’s done a lot of the work, boots-on-the-ground geologists, and everybody who’s been so dedicated to the project the last eight years. Everything has advanced so much in that timeframe.

“People (in Wells) are excited about the project and want  to se it advance. We’ve worked with so many great people in the community so we’re really excited to keep moving forward with this.”

Layman will receive her AME award on Jan. 25 in Vancouver.