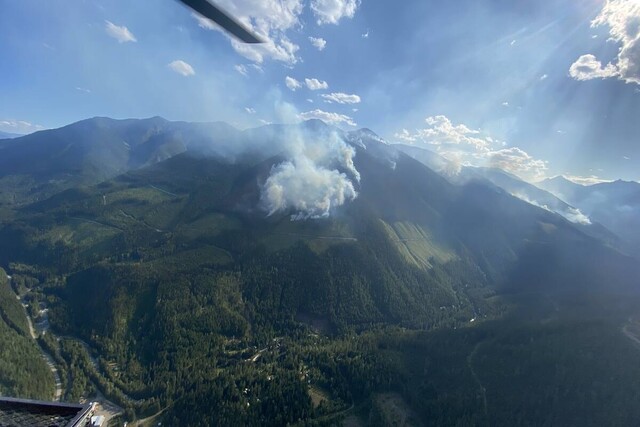 Photo: BC Wildfire Service
Briggs Creek wildfire near Kaslo in 2022.

The manager of Kaslo and District’s community forest says a fire that burned in their tenure area last summer could cost it millions of dollars – and even threaten its long-term viability.

Representatives from the Kaslo and District Community Forest Society, Village, and emergency officials are planning to meet soon to assess the long-term damage caused by the Briggs Creek wildfire.

The fire could be devastating to the community forest, says KDCFS manager Jeff Reyden.

“It’s fairly concerning,” he told the Valley Voice. “If the timber was totally wiped out and unsalvageable, it would have a larger impact, but if the markets – they’ve been really strong the last couple of years – if they tank next year, and we can’t sell the timber, it could have a huge impact on our licence.”

The Briggs Creek fire began August 1 in the high country about 11 kilometres west of Kaslo, was clearly visible at night and, at its height, occasionally dropped ash and embers on the community. Residents of South Fork just west of Kaslo were put on evacuation alert for several weeks.

Weather conditions worked in the community’s favour and the fire petered out over the fall, smouldering in the high country. In all, about 2,160 hectares of forest burned, including 200 hectares of KDCFS tenure.

A geotechnical report released earlier this fall predicted little impact from the fire, either in debris flows, slope failures or water quality for Kaslo. The analysis made no mention at all of any impact to forest operations.

But Reyden says that’s because they did an aerial survey, which missed the real damage.

“I flew the area a couple of times with BC Wildfire Service. From the air, it looks not that bad. Maybe 20% of the area was looked at. The other 80% looked green,” says Reyden. “It looks like we were unscathed by the fire.

“But once we started walking in the timber, everywhere the fire burned the ground, the fire was quite intense. It burned off all the duff – a lot of the roots are compromised.”

The fire has rendered the company’s forestry operations plan for the next few years obsolete, forcing them to conduct a salvage campaign instead.

“The timber is not charred, so the trees will still make lumber,” says Reyden. “But it definitely impacted our planning. We had planned to go to different areas next year but we’re developing these 50,000 metres or more, which is two to three years of annual cut.

“The timber value is about $5-6 million of timber we’re trying to salvage here.”

That’s if prices remain high. Another factor is the difficult terrain much of the burn area consumed. Reyden says much of the forest has to be cable-logged, one of the most expensive ways to log.

Another thing not shown on the fire maps is the impact to the organization’s – and the forest’s – future.

“And our plantations, we lost about 100 hectares of plantations, which will cost a half-million dollars to replant,” Reyden says, though he notes there’s government funding available to cover the loss of the seedlings.

The situation came up at the Kaslo council meeting November 22, with councillors calling for a ‘pre-meeting’ with KDCFS managers and the fire department. That meeting will set the stage for a debrief with the BC Wildfire Service.

In the meantime, Reyden is continuing to assess the impact of the fire and plan the salvage operation. The community forest will also work to further FireSmart and other wildfire resilience efforts in the Kaslo area.

“This was a bit of an eye opener, this fire, on how fast it can move on us,” says Reyden. “We need to do more from a community forest, Village and private-landowner perspective to help our community prevent wildfires.

“We’re doing more planning with some of these groups – recreation and trail groups and the Village – to do more fuel breaks on our landscape close to the town. As well as more fire prevention work and public education.”

The KDCFS holds tenure on about 34,000 hectares of forest in the Kaslo area.