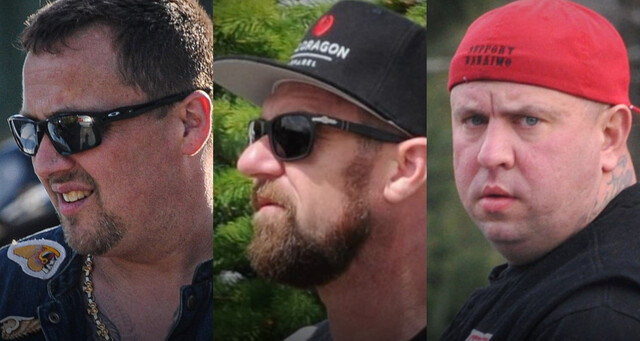 Four men are facing a number of charges following a multi-year investigation into drug trafficking connected to the Hells Angels Nanaimo chapter.

In a press release Thursday, the Combined Forces Special Enforcement Unit of British Columbia announced 41 charges have been approved against four men, following an investigation that began back in June 2018.

The joint investigation between the CFSEU and the RCMP’s Federal Serious Organized Crime unit targeted the criminal networks of members of the Hells Angels Motorcycle Club in Nanaimo and their support clubs, the “Savages MC” and “Devils Army MC.”

In the press release, Sgt. Brenda Winpenny of the CFSEU says police determined the Hells Angels were looking to expand their drug trafficking operations and create additional Hells Angels chapters on Vancouver Island.

“Over a period of approximately 22 months, evidence was obtained that progressed the investigation leading to the Public Prosecution Service of Canada approving a total of 41 charges against four individuals on Nov. 30, 2022,” Sgt. Winpenny said.

It's not clear how many search warrants were executed during this investigation, but a large amount of cocaine, methamphetamine, illicit cannabis and oxycodone pills were siezed, along with a number of firearms, and five tubes of “commercial emulsion explosives.”

A home has been “restrained” by police as well, while three vehicles were seized as “offence-related property.”

Full-patch Hells Angels Sean Kendall, a 44-year-old from Port Alberni, and William Paulsen, a 51-year-old from Campbell River, have been charged, with both facing cocaine trafficking charges. Paulsen also faces charges for methamphetamine trafficking and possession of six tubes of “Senatel Magnafrac” explosives.

Kristopher Smith, a 44-year-old from Nanaimo, has been charged with trafficking cocaine and oxycodone, in addition to a number of firearms charges.

William Thompson, a 58-year-old from Ladysmith, is facing a number of firearms charges, along with possession of cocaine.

While Thompson has been arrested, and released, arrest warrants have been issued for for Smith, Paulsen, and Kendall.

“If anyone has any information in connection to the location of these men please contact your local police or Crime Stoppers,” Sgt. Winpenny says.

She says the investigation has stopped the Hells Angels from expanding on Vancouver Island and disrupted an “alleged significant drug trafficking network.” 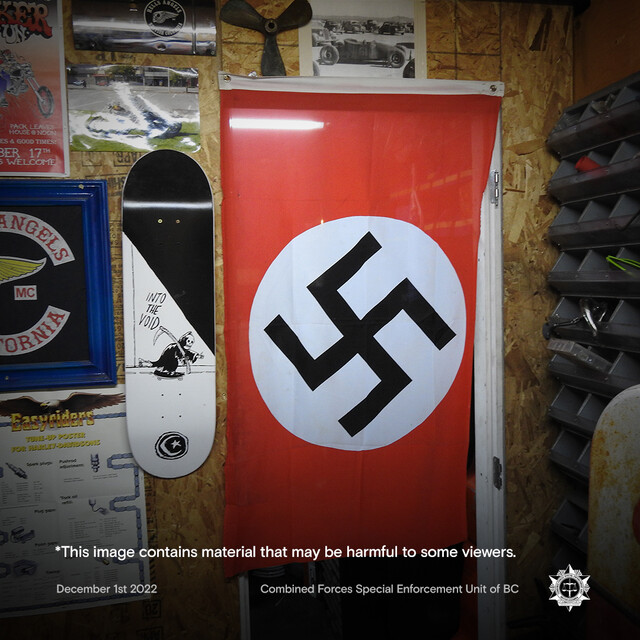 Photo: Contributed
A Nazi flag was found during one of the search warrants in the investigation. 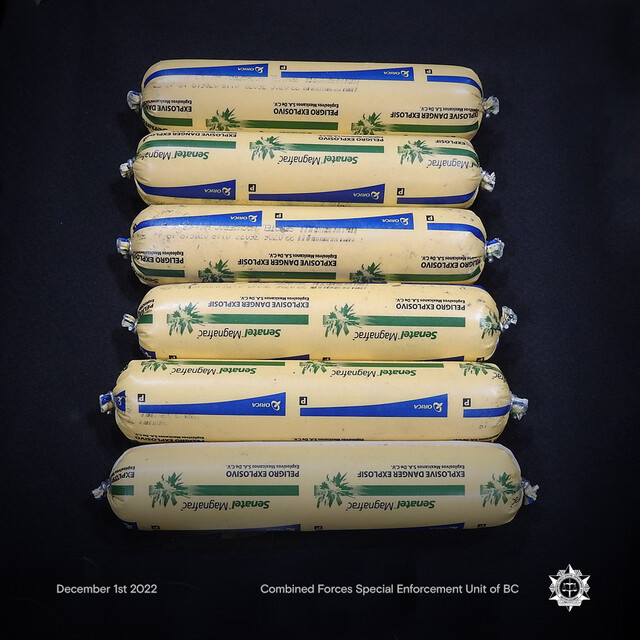