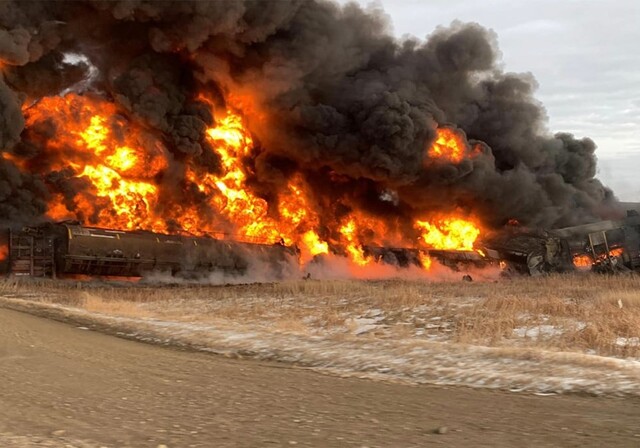 Emergency crews have responded to a train derailment and fire near Macoun, Sask.

The incident occurred Thursday morning northwest of the village. Photos supplied from the scene show a number of rail cars have left the track. A fire has also occurred with some of the rail cars.

Highway 39 is currently closed near Macoun and entrances into Macoun are blocked. A report from the Ministry of Highways and Infrastructure's Highway Hotline asks motorists to find an alternate route due to the fire. There is zero visibility in the area due to the smoke.

The Highway Hotline called it "a dangerous scene".

In a news release issued at 11:23 a.m., the RCMP said no injuries have been reported.

Canadian Pacific Railway is at the scene and investigating the matter.

Aaron Toles, the emergency management officer with the RM of Cymri, said the Village of Macoun and the RM of Cymri have both declared states of emergency. Also, those who reside with 2,200 metres of the train fire have been evacuated. Those from the RM have been advised that the Harry O Memorial Arena in Midale is open and available to them, while those who were evactuated in Macoun can go to the William Snider Memorial Park Recreation Centre.

"If you need to be evacuated, you should have been contacted by either the Village of Macoun or the RM of Cymri," said Toles.

Those who fall outside of the 2,200-metre zone would not need to be contacted by the RM or the village.

They are currently waiting for CP Rail's hazardous materials team to assess the situation before the process of extinguishing the fire begins. Midale-Cymri Fire and Rescue and First Responders are at the scene, along with members of the Estevan Fire Rescue Service through a mutual aid call.

Thanks to Amber Mantei for submitting the video below.