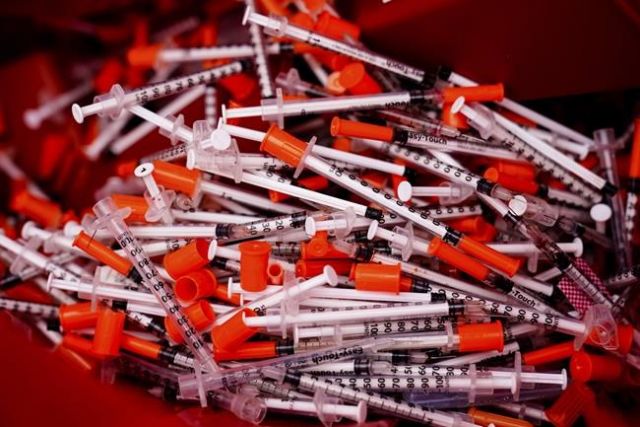 Photo: The Canadian Press
Shown are used syringes collected at a needle exchange run by Camden Area Health Education Center in Camden, N.J., Thursday, Feb. 24, 2022. Health advocates say the federal prison needle exchange program is failing because of a poor rollout by the Correctional Service and a lack of improvement since it was first introduced in 2018. THE CANADIAN PRESS/AP-Matt Rourke

The federal prison needle exchange program is failing because of a poor rollout by the Correctional Service of Canada and a lack of improvement since it was introduced four years ago, health advocates say.

Inmates at nine of the 43 federal prisons have had access to sterile equipment for drug use since the program last expanded in 2019, and last summer officials said it would be implemented across the country.

The HIV Legal Network published a report this week that found the program is still inaccessible to most people and has not expanded beyond those nine institutions.

In June, only 53 people — of nearly 13,000 offenders in federal custody — were participating in the program.

“A lot of people who want to access the program because there's injection drug use happening inside prisons are not able to access it because of the multiple barriers to participation,” she said.

The federal government said it is committed to expanding the program but that COVID-19 caused a delay in its plans.

A June 15 briefing note prepared for Public Safety Minister Marco Mendicino said consultations were held in early 2020 to expand the program to two more institutions, but “following delays as a result of the COVID-19 pandemic, re-engagement with these sites is required.”

The note, obtained through an access-to-information request, also said Correctional Service Canada would prepare plans for additional sites to be confirmed this fall.

Correctional Service spokeswoman Esme Bailey said in an emailed statement that the department is still committed to putting the program in more prisons and consultations continue.

For people behind bars, participation in the program requires approval that includes an evaluation by a nurse and a threat assessment approved by a warden. No reasons are provided as to why an application is given the green light or not.

Ka Hon Chu says the process creates an “extremely high barrier” that dissuades people from applying “because there is zero guarantee of actually being accepted.”

The HIV Legal Network study, which was done with the help of Toronto Metropolitan University, said the assessment process is based on “security rather than clinical need” and the program requires daily inspections to verify equipment is being used correctly.

Participants are given a kit containing one syringe, one cooker, three water bottles, one vitamin C and filters. They are required to always keep the kit visible in their cell and visit a nurse when replacement pieces are needed.

Ka Hon Chu said participants are effectively “outing” themselves as drug users and risk being stigmatized by other inmates, correctional staff and the parole board.

The report recommends enhancing confidentiality by removing the need for daily visual inspections and by offering more discreet distribution points.

It also said a lack of knowledge about the program is affecting uptake.

Advocates argue in the absence of adequate programming aimed at harm reduction, the risk of HIV infection will continue to rise because people are relying on using unsanctioned, unsafe means of using drugs while behind bars.

“The concern is that there'll be more equipment floating around in prisons, but the reality is that there is a lot of injection equipment already in prisons that (is) just not regulated and it's not sterile,” said Ka Hon Chu.

The correctional investigator said in his latest annual report, released last summer, that the needle exchange program “exists more in name than in practice” because of low participation rates.

He said the culture in Canadian prisons "remains mired in a prohibitive and repressive mindset."