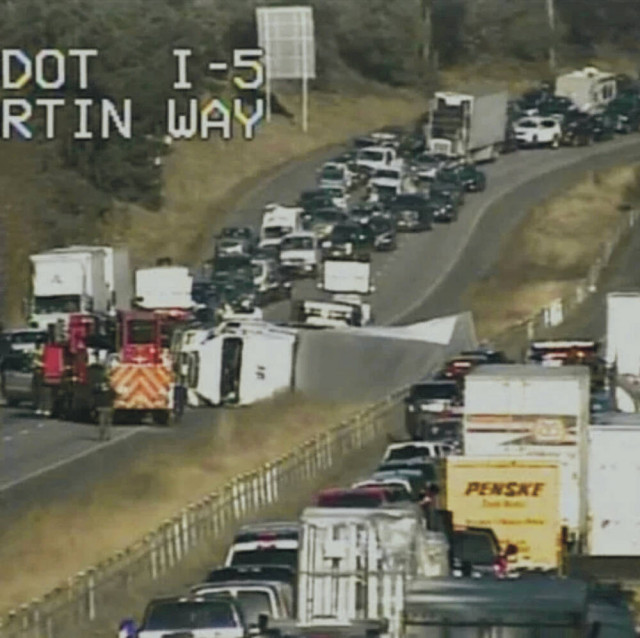 There’s a Kelowna connection to the man killed in a freeway standoff with police in Seattle.

Neil Costin lived in the Okanagan before moving to Vancouver Island, and had at least two run-ins with the law.

In January 2020, Costin was sentenced to 75 days in jail for intimidating the justice system after an incident outside the Kelowna courthouse.

On the first day of his trial on charges of assault and uttering threats, Costin confronted the victim near the Kelowna Yacht Club. He called the other man a ‘lying squid’ and yelled 'the truth will come out,' and 'I will see you in court'.

“This type of an offence is an affront against the justice system,” said Judge Lisa Wyatt during his sentencing hearing. “Witnesses who intend to testify in trials must know they can do their part safely, free from harassment or intimidation by others including the accused.”

At the time, Costin said, “I think I've gone through enough, I've learned my lesson, I stayed out of trouble (while on bail) and I just want to move on.”

He was living in Nanaimo at the time of his conviction and was ordered to serve his intermittent sentence in that city.

--with files from Cindy White and Nicholas Johansen

A Nanaimo man has been identified as the person shot and killed in a standoff with police after he allegedly hijacked a tractor-trailer on the Interstate 5 freeway south of Seattle.

Authorities said the man was Neil Alexander Costin, 32. He died from multiple gunshot wounds Nov. 18 when police opened fire as he advanced toward them with a box cutter.

Thurston County coroner Gary Warnock said police had been alerted to a man running in and out of traffic on the freeway banging on vehicles. The man was able to stop the tractor-trailer and assaulted the driver before taking the wheel himself, Warnock said.

The rig headed south and hit a number of vehicles before rolling onto its side and into a median.

“It wasn’t like a high-speed type thing,” Warnock said.

Police reached the scene and ordered him to get out, but he at first did not obey and a SWAT team was called. An armoured vehicle was used to break the windshield and he finally emerged after a four-hour standoff, but was wielding the box cutter and was shot, Warnock said.

He said the events leading up to the shooting were traced back to Nov. 15, when Costin is alleged to have been seen around heavy equipment about 4 a.m. in a logging camp near the Canadian border, in the vicinity of Sumas, Washington.

Workers called the border patrol, who found a suspect matching the description that had been given and began questioning him.

Costin is alleged to have given the assumed name “Derek Michael White,” and said he was an American citizen who had gone to Canada to see his girlfriend, Warnock said. He did not produce identification.

Warnock said Costin was eventually released because the border patrol did not want to expel an American citizen to a foreign country.

“He said he was a U.S. citizen so they took at face value what he told them.”

The next time Costin was seen by law enforcement was at the freeway incident, Warnock said.

After the shooting, fingerprints were taken and were later matched with those taken of the man seen near Sumas, but Warnock said no match was found in a national data check for the name Derek Michael White and the date of birth that had been given.

Warnock said he had a “gut feeling” about the real identity of the person.

“I thought: ‘You know what, maybe he’s a Canadian citizen’.”

So he sent the booking photo taken in Sumas to the RCMP and asked them to share it with border personnel.

He supplied the post-mortem fingerprints to the RCMP on Monday and the identification was concluded Tuesday afternoon.

Costin’s parents, whom he lived with, were located in Nanaimo.

Warnock said his office is investigating the case and looking at the circumstances of the officer-involved shooting.

“It’s an unnatural death, so any time there’s anything that’s sudden, violent or unexpected we investigate those cases.”