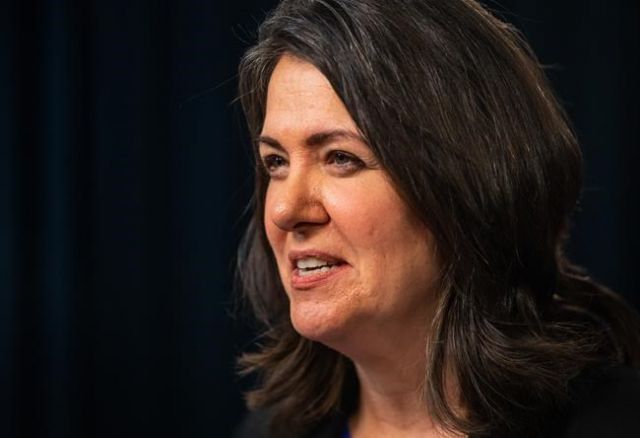 Photo: The Canadian Press
Alberta Premier Danielle Smith speaks at a press conference after the Speech from the Throne in Edmonton, Tuesday, Nov. 29, 2022. Alberta Premier Danielle Smith is rejecting Opposition accusations a bill granting her and her cabinet sweeping powers to rewrite laws behind closed doors is an undemocratic, dangerous power grab. THE CANADIAN PRESS/Jason Franson

Alberta Premier Danielle Smith is rejecting accusations that a bill granting her and her cabinet sweeping powers to rewrite laws while bypassing the legislature is an undemocratic, dangerous power grab.

“But yesterday we learned the premier’s approach on sovereignty is not that, but rather a full-throated power grab from Albertans.

“She’s granting herself the ability to write laws in secret behind closed doors, no reviews, no checks, no balances. Just an unprecedented abuse of authority.”

Not so, said Smith. She said the legislature is still in charge.

“Every decision that is going to be made has to first get the validation from this assembly,” said Smith.

“This assembly will pass a motion, and it will give the direction to cabinet. It will always be the direction of the members (from which) we will make decisions in cabinet.”

Smith made the comments a day after she introduced her first bill as Alberta’s new premier, fulfilling a promise she made in the recent United Conservative Party leadership campaign to bring in legislation granting Alberta the power to reject federal laws and policies deemed to be interfering in provincial jurisdiction.

The bill, titled the Alberta Sovereignty Within a United Canada Act, would give Smith’s cabinet the power to decide which federal laws, programs and policies — or potential federal initiatives — are unconstitutional and need to be challenged.

They would then be granted sweeping authority usually reserved for public emergencies to meet the threat.

Cabinet would be allowed to rewrite bills they deem necessary to meet the harm being done to Alberta.

They would also be given the power to direct any provincial agency, municipality, school board, health region or municipal police force and others to not enforce federal laws.

The bill also states that before cabinet can act using such extraordinary powers, the legislature would first have to pass a special resolution that spelled out the nature of the federal harm and the recommended remedies.

It is this legislature oversight Smith said would keep cabinet on the straight and narrow.

However, the bill does not stipulate cabinet must follow the specific direction of the legislature. Instead, it says cabinet “should consider” using the remedies spelled out in the resolution.

When it comes to the extraordinary measures, the bill says cabinet is free to carry out whatever it deems “necessary or advisable” to meet the threat.

Administrative law professor Martin Olszynski, who has written on the sovereignty bill since Smith first proposed it in the spring, said if the government truly wanted to make sure cabinet had to directly and explicitly follow the wishes of the legislature, it should have made that clear in the bill --  but it didn’t.

“There’s lots of room here for (cabinet) to exercise discretion,” said Olszysnki in an interview.

“What they’re asking is for Albertans to take them on faith that they will exercise (these powers) in a restraining manner when they can’t even bring themselves to bind themselves using the language of the act.”

Olszysnki and other constitutional experts have criticized the bill as constitutionally questionable and a major overreach of provincial authority.

Smith defended the bill after it was introduced Tuesday, saying Alberta has tried less confrontational measures to no effect and that the federal government needs “a push.”