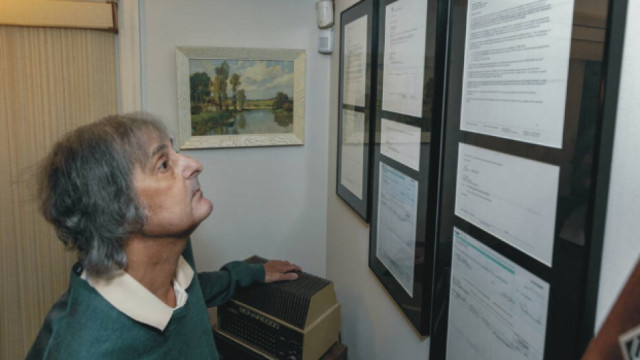 Photo: Photo: Darren Stone, Times Colonist.
Ramsay Hamdi, a health economist who was one of seven Health Ministry employees wrongly fired a decade ago, looks at framed government apologies and cheques that he has hung on his wall in Cadboro Bay

Ramsay Hamdi has had a framed apology from the province hanging on his wall since 2018.

Now the former B.C. Health Ministry employee, one of seven wrongly fired a decade ago, has hung the last of his compensation cheques as a probe into the matter closed Tuesday.

“We never got an apology from B.C. Liberal premier Christy Clark,” said the 66-year-old health economist from his home in Cadboro Bay. Instead it came from the NDP, which formed government five years later. “So this is sort of a very nice second best.”

Hamdi, a health economist, was a unionized employee of the Health Ministry for 28 years and making about $71,000 a year when he was swept up in a flawed government investigation into an alleged privacy breach of anonymized data and contract-award irregularities related to the Health Ministry’s pharmaceutical services division. One of the fired employees, University of Victoria co-op student Roderick MacIsaac, subsequently took his own life.

The Health Ministry investigation was guided by suspicion and driven by rushed decision-making, B.C. ombudsperson Jay Chalke wrote in a 488-page report titled “Misfire,” which was referred by an all-party committee of the legislature in 2015 and released in April 2017.

The report found that the Health Ministry under the B.C. Liberal government acted wrongly in firing the seven ­people.

The government also falsely suggested at the time that there was an RCMP investigation.

Chalke said Tuesday that the government has now implemented the final four of 41 recommendations from his report, including settling the employees’ grievances.

He said the firings will have lasting and in many cases lifelong impacts. “And I think we should recall one individual loss of life to suicide following the events that happened, and so it really is a stark reminder of the importance of how things can go off course, and the importance of looking into those matters deeply, and looking to what we can do to make sure it never happens again,” he said.

The original recommendations included apologies and ex gratia — or voluntary — payments to most affected individuals, a $500,000 scholarship fund in MacIsaac’s name, new policies around conflicts of interest and human resources investigations, and new guidance on access to health data.

The recommendations also included two new pieces of legislation — the Public Interest Disclosure Act and amendments to the Public Service Act — involving whistleblower protection, and establishment of a merit commissioner to review all just-cause dismissal practices.

Hamdi said his grievance was originally bungled by the B.C. General Employees’ Union. “We were basically left naked … the government was poking us with sticks and there’s nothing we could do.”

Four other recommendations that Chalke had originally cleared as completed have since been readdressed.

“I considered that government could take additional measures to make implementation more robust,” Chalke said. More case studies were added, for instance, in a training document about conflict of interest examples.

Out-of-court settlements were also made with non-union employees Malcolm Maclure, Rebecca Warburton, Ron Mattson and Robert Hart, who was re-hired and dropped his wrongful dismissal and defamation lawsuit.

Aside from reopening grievances, the final four recommendations that have been implemented included compensating public servants who were wrongly disciplined but not fired, payments to individuals working for research companies that lost business during data-sharing and contract suspensions, and improving the work culture within the Health Ministry.

Chalke said while those steps “cannot fully remedy the harms caused by the wrongdoing we described in our report,” new systemic changes should see that such firings can’t be repeated.

The ombudsperson said he’s been assured that the government is committed to applying the changes “because the lessons learned from this investigation must not be forgotten.”

Hamdi said he’ll get together with the other fired researchers prior to Christmas. The 2012 investigation that changed their lives is now in the past, but always with them, he said.

“If I could hit the rewind button, I probably would have shown a little more backbone, because I had no idea what was going to happen to us,” said Hamdi. “It was like being wrongly accused of murder. In the beginning, no one believes you.”