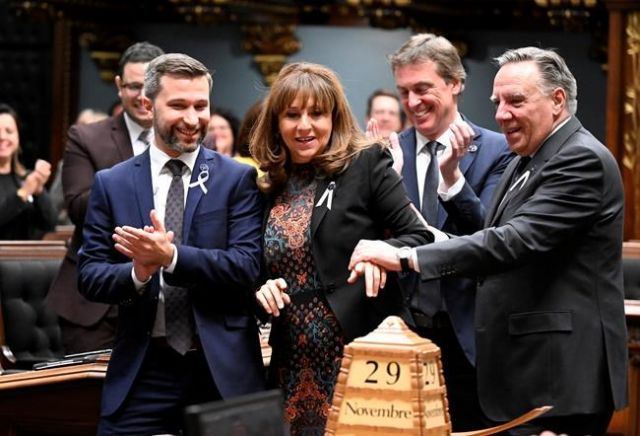 The three Parti Québécois members who have steadfastly refused to swear the oath of office to King Charles III found themselves on the outside looking in Tuesday as Quebec's legislature reopened without them.

Since winning their seats in the Oct. 3 election, the three-member PQ caucus has been taking a stand against what it says is the "humiliating" oath to the King. The 122 other members of the legislature have all taken the oath.

As the assembly reopened Tuesday for the first time since the election, PQ Leader Paul St-Pierre Plamondon told reporters he and his two colleagues will attempt to enter the legislature later in the week.

"We find that … to humble ourselves to the point of perjuring ourselves for the King of (Canada), this is not acceptable as there are solutions," St-Pierre Plamondon said.

To sit, elected Quebec members must take two oaths of loyalty: one to the Quebec people and another — as required by the Canadian Constitution — to the King. Outgoing Speaker François Paradis ruled in November that all elected members must take the oath to the King or risk expulsion from the legislature.

"We decided not to make a big splash today and simply reached out (to Roy) and said, 'You have that power, because internal management is entirely up to you, to give a very simple instruction to let us in,'" St-Pierre Plamondon said.

On Tuesday, Roy became the second woman ever to hold the Speaker's post.

St-Pierre Plamondon said his party doesn't want to create a scene and will wait until after Legault's speech to try and enter the legislature — known as the Blue Room — and see how the government reacts. St-Pierre Plamondon wouldn't speculate on what he would do if the sergeant-at-arms refuses to let the PQ caucus inside the room.

Earlier in the day, Québec solidaire co-leader Gabriel Nadeau-Dubois said his party planned to table a bill on Thursday that would make the oath to the King optional, adding that he thought there was a desire among members to move quickly on the file. His party had also refused to swear the oath but relented after Paradis threatened to expel them.

Simon Jolin-Barrette, the justice minister and government house leader, has said his party would table a bill next week to make the oath optional. “It is our wish that it be adopted before Christmas,” Jolin-Barrette told reporters.

The legislature will sit for a total of eight days before it wraps on Dec. 9 for the holidays. It is scheduled to reopen at the end of January.