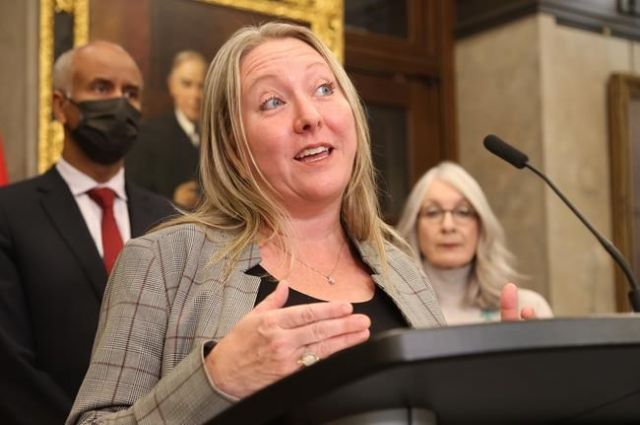 Photo: The Canadian Press
President of the Treasury Board Mona Fortier.

The federal government is launching an external review of the legislation that governs whistleblower protection in the public service.

Treasury Board President Mona Fortier is asking a nine-member task force to consider reforms to the federal disclosure process that would strengthen supports for bureaucrats who come forward to report wrongdoing.

Fortier said in a news conference Tuesday that the law that's on the books is 15 years old and "it's time to carefully consider how to improve it."

The review of the Public Servants Disclosure Protection Act will begin in January and is slated to take between 12 and 18 months to complete.

Conservative critic Stephanie Kusie said the move is "nothing but a delay tactic."

She pointed out in a written statement that a House of Commons committee made a wealth of recommendations in a 2017 report, and that some amendments are already on the table in a Bloc Québécois private member's bill.

"This government demonstrates time and time again that they do not prioritize protecting public servants," said Kusie. "It is also disappointing that the Liberal government continues to delay reforms by appointing an external task force to 'consider the parliamentary debate' rather than participate in the parliamentary process."

The decision to conduct a review comes after a report commissioned by the Office of the Public Sector Integrity Commissioner found "palpable and widespread" pessimism among public servants who were asked about whistleblowing.

The report by Phoenix Strategic Perspectives Inc., delivered earlier this year, said federal workers are increasingly cynical, skeptical and disillusioned about the idea, and they are more likely to fear reprisals than they were before the COVID-19 pandemic.

Fortier said if public servants are to play their "integral role in the functioning of our democracy," then they must be able to work in an environment that is safe, respectful and "grounded in ethics and values."

She said workers must feel safe to disclose wrongdoing.