'You can't ignore it' 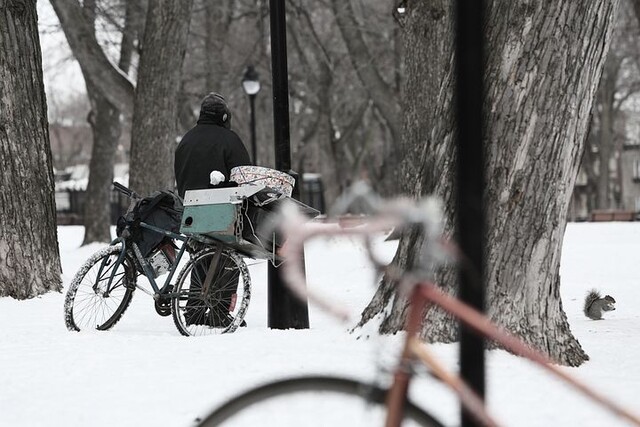 A Penticton businesswoman who has been volunteering her Friday nights for outreach work is upset at the lack of care she says she has seen the homeless population face as temperatures drop.

Amanda Stewart joined the Penticton Area Overdose Prevention Society (P+OPS) four months ago and has been involved in helping provide food, hot drinks, blankets and clothing to those in need.

“A couple of weeks ago, I started to get really frustrated,” she said. “I'm scrambling for blankets and jackets and warm things for people, tents or anything like that and every Saturday morning, Bylaw throws all these things away.”

“Saturday night, a different group of people are scrambling to get blankets and tents and boots, and by Monday morning, Bylaw is throwing all that away again. And it's just this never-ending cycle of everybody wasting their time," Stewart claims, based on what she says she has heard from people on the streets and seen herself while on outreach missions.

A particularly tragic case hit Stewart this past Friday when she was trying to find a bed for a distressed woman; all she had was her clothes and a tarp.

With beds full at all shelters and at the South Okanagan Women in Need Society, the woman had no place to go.

“We just could not do enough for her with our donations of a few blankets and a jacket … We don't have a winter shelter here in Penticton this year, nothing permanent. [An emergency winter weather shelter] is sporadically [open] down at the Seventh Day Adventist Church. So we've been really focused on keeping people warm on the streets,” Stewart said.

“This lady told me that her stuff had all been thrown away by Bylaw.”

Penticton Bylaw Services says tents and other items for warmth are not being disposed of without cause. Bylaw manager Tina Mercier said in a statement to Castanet that during this cold weather stretch, their Community Safety Officers (CSOs) are working hard to help those suffering from the elements.

“Our officers are using common sense and not taking away tents, sleeping bags or blankets unnecessarily,” Mercier wrote.

“We appreciate this is an even more difficult time for our vulnerable population and are looking for ways to assist them. If items are left abandoned or could be a hazard, we do follow a removal process. We are working closely with community partners to connect people with shelter and, when open, let people know of the emergency weather shelter.”

Stewart said that she wishes there was a better solution.

“There's no shelter. They're removed from every single doorway. There's actually not even drop-in hygiene or daytime warming or anything right now. Some people haven't had a shower in a month.”

Since temperatures have dropped, 100 More Homes Penticton stated in a media release on Nov. 18, that they have been working in partnership with BC Housing and a network of local community agencies to provide an Emergency Weather Response (EWR) shelter to unhoused members of the community during periods of extreme cold.

United Way BC is the supporting organization of 100 More Homes and clarified that United Way BC is not running a shelter but is part of a "collaborative group working to prevent and address homelessness in Penticton."

An EWR shelter has opened on some days throughout November and 100 More Homes said this was a temporary location and there is no confirmed location moving forward.

"The trigger to open these shelters is determined by individual communities and operating partners. 100 More Homes, in partnership with BC Housing and the City of Penticton, has determined that EWRs in Penticton, will be activated when available at -7 degrees Celsius."

Without a place to stay, individuals on the streets sometimes resort to hiding in unsafe places to stay warm.

Stewart referenced a man who lost his life sleeping in an unlocked recycling dumpster last April after being inadvertently crushed when he was dumped into a truck.

When the Salvation Army lost their van and their storage equipment after a fire tore through their property in October, they believed the cause was people setting the fire to try to keep warm.

“That's what people are reduced to,” Stewart added.

Castanet reached out to BC Housing and asked about plans to establish an EWR or a temporary shelter.

In a statement via email, BC Housing said that Penticton currently has 75 shelter beds available year-round as of the opening of Compass Centre in April 2022.

"We are actively working with community partners to secure additional winter shelters in the City. In addition to shelters already in operation, outreach workers are actively connecting with people sleeping outdoors to ensure they’re aware of drop-in services and resources, including warm clothes, access to meals and other community-based support services."

BC Housing said that more shelters will open in the coming weeks and months in many communities around the province. But Penticton will need additional resources first.

"We have funding available to open additional shelter spaces in Penticton. However, we require an operator and available space."

BC Housing added that their work to address homelessness is going beyond providing shelters, which is why affordable homes and supportive homes have also been established.

Stewart posted her story to a local Facebook group, hoping others would recognize how bad the situation is getting and to reach out to the provincial government for changes. But she says the message is difficult to get out, as many hold a stigmatized view of the population.

“I'm on both sides of the coin too. I own two local businesses here. Every goddamn two months, I'm getting a window or a door smashed or a break-in or some such bulls**t. But I also know that it isn't the guy with the three carts of jackets that's doing it,” she said.

“It isn't the person that's, generally speaking, 'street entrenched,' is what we call them. Just about every time they've caught a person who has done one of the crimes against me, they've had a roof over their head," Stewart said.

"They have lived in a motel or they've lived at home or they've had an address. I'm not saying that all street people are innocent ... Homelessness is so huge that people like me, that are just kind of like a soccer mom, or just like you, you can't ignore it. And that's why I'm involved.”

In the meantime, donations can be dropped to P+OPS, who can be contacted through their Facebook page here or one of 100 More Homes’ partner organizations, ASK Wellness, which receives donations at Burdock House (594 Winnipeg Street) or Fairhaven (2670 Skaha Lake Road) locations. 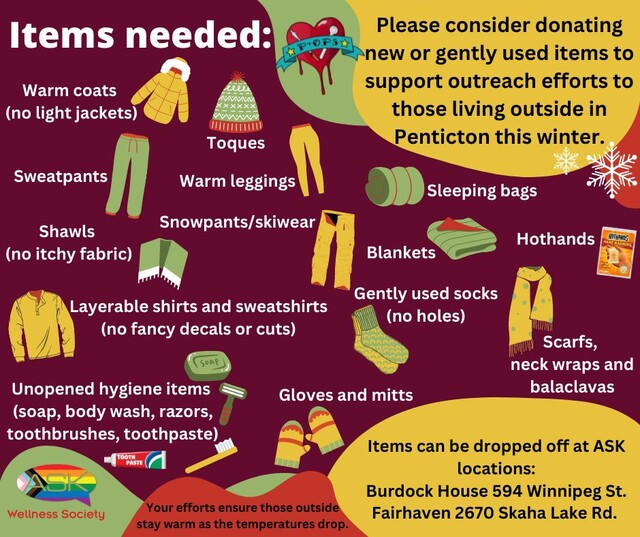