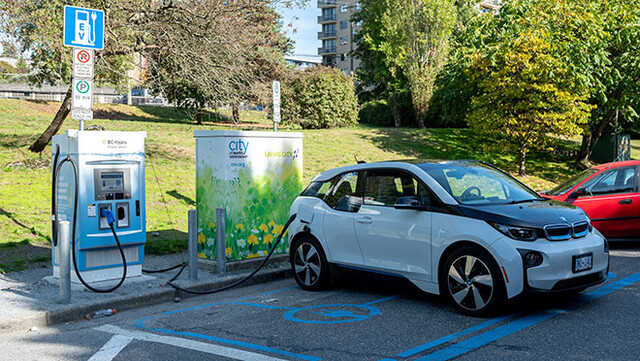 A BC Hydro electric vehicle charging station in Horseshoe Bay has damaged at least two cars, with one woman facing over $6,000 in repairs.

On Thursday afternoon, two cars that had been plugged in to the charging station on the corner of Bruce Street and Royal Avenue had to be towed away from the site after both vehicles failed to start.

“I turn my car on to leave and it won’t go into reverse, it won’t go into drive either, and there’s a display of colourful lights in my car that are giving me warnings,” said Hannah Sopcak, who had used the charging port countless times before without issue.

Sopcak, visiting the mainland from her home on Bowen Island, had errands to run and had planned to pick up a friend from school. With a tight schedule to adhere to, she had waited in the 2013 Nissan Leaf while giving it a brief, 20-minute charge.

When the car refused to start properly, Sopcak called her mom, who in turn called a tow truck.

“While I’m waiting, another guy comes up to charge his car, and he seems pretty confident that the same thing wouldn’t happen to him as he had a newer Nissan Leaf,” said Sopcak.

“He plugs in his car while I’m waiting for my mom to arrive, and when we return from running errands – almost two hours – he’s still there, because his car has been ruined by the charger too.”

“So now we’re both waiting for the tow truck, and we’re both really confused.”

It wasn’t until Friday evening that they received the prognosis: there was damage to the battery and it would take a week, and $6,300, to repair. With Sopcak’s vehicle no longer under warranty, she is forced to front the costs herself in addition to paying for the tow truck and an emergency rental car.

Jenny Sopcak said the second driver, who she has remained in contact with, will have the damage covered but he too is hoping to have the tow truck and the car rental covered. Neither have yet heard back from BC Hydro.

Tina Clark, who runs a dog grooming business opposite the charging station, said the two incidents had been the latest in a string of car casualties.

“Jenny and another fellow’s car had been the fourth or fifth to be towed from this certain EV charging station ever since they did upgrades to it,” said Clark, who said she had seen BC Hydro upgrade the station “about two to three weeks ago.”

Since Thursday she has seen numerous people attempt to charge their car only to move on when they notice the station has been deemed out of order, she said.

BC Hydro spokesperson Susie Rieder said the electric services company is “committed to working with the customer” through their claims process.

“Last week, two cars were affected by a possible performance issue at our charging station in Horseshoe Bay,” she said.

“As soon as we heard about the issue, it was immediately taken out of service and replaced with a new charger the next day.”

Rieder said BC Hydro is still working to find out exactly what happened.

“A team is currently investigating so we can try to avoid anything happening like this again in the future.”