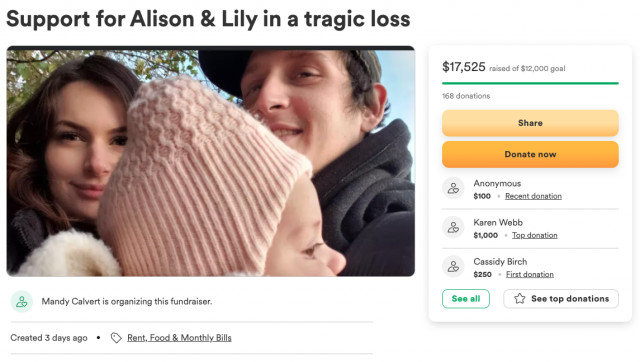 Photo: .
Screenshot of the GoFundMe page for the family of a local man killed in a float plane accident.

There's been an outpouring of support and grief on Sunshine Coast social media this week as news broke that a local man was among three deceased in a plane crash near Port Hardy last week.

Although the RCMP has not released a name, social media posts from friends and family have identified Colby Drinkwater. A GoFundMe for Drinkwater's partner and toddler daughter was set up Nov. 24 and has raised $17,525 as of Nov. 28, surpassing its $12,000 goal.

"He was a partner, dad, son, brother, cousin, nephew, and way too young," reads the GoFundMe page's description.

Drinkwater had been heading home from a logging camp for days off when the plane crashed, according to the fundraising page. "This account is set up to raise funds to take some financial stress off of an incredible, hard working single mom to allow her to focus on her daughter, herself, and family in this shocking, devastating time."

Drinkwater was one of two passengers in a Cessna float plane that crashed near Strachan Bay, about 28 nautical miles northwest of Port Hardy, on Nov. 23. The pilot was also killed. “The RCMP and Transportation Safety Board are both conducting parallel investigations to determine what may have caused the plane to go down," the RCMP said on Friday. An update Monday said that there is no criminality suspected.

A GoFundMe update on Nov. 26 said that, "Ali and Lily are feeling so much love and gratitude for all the kind messages, donations, and support. Heartfelt thank you to everyone."

According to Drinkwater's social media, he had lived in Gibsons and had attended Elphinstone Secondary School.