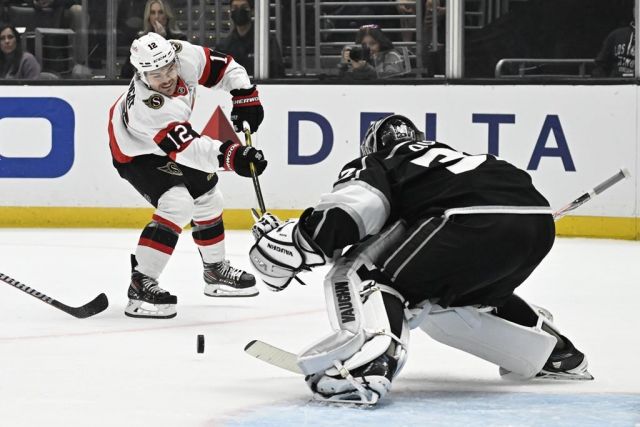 LOS ANGELES (AP) — Claude Giroux scored on a breakaway 20 seconds into overtime, Brady Tkachuk had a goal and an assist and the Ottawa Senators beat the Los Angeles Kings 3-2 on Sunday night.

Alex DeBrincat had a power-play goal, Cam Talbot made 25 saves and the Senators won consecutive games for the first time since a four-game winning streak in late October.

“When you play well, and you look after the game and you’re happy with your game but you didn’t get the result, it’s easy to go off page and start doing your own thing," Giroux said. "But it’s good to know that we played the way we wanted to tonight and we have the result, so we know it works.”

Arthur Kaliyev scored two power-play goals for the Kings, winners of just one of their past five games. Kaliyev became the fifth Los Angeles player in the past decade to score twice on the man advantage in one period.

“He’s a great shot, and he knows where to be, and we just try to find him," Kings forward Viktor Arvidsson said. "Today, he buried two, and it was good.”

Jonathan Quick allowed three goals on 39 shots, and Phillip Danault had two assists, but Los Angeles did pick up at least one point for the seventh time in its past nine home games.

Giroux waited out Quick for his ninth goal on the breakaway set up by Tim Stutzle’s stretch pass. Stutzle had two assists, while Giroux had an assist for his fifth multipoint game of the season.

“I’m pretty sure it was a back-end saucer pass all the way down there. The whole goal was special,” Ottawa defenseman Thomas Chabot said. “G, what a move. And, obviously, it was big for us. It’s a lot of confidence for our group, and to see that we can do it that way, it’s big for us.”

Tkachuk’s 99th career goal was the only scoring of the first period. He jammed the puck in at the near post after Chabot’s shot deflected wide and caromed off the boards to put Ottawa up 1-0 at 4:55.

The power play became a factor in the second period, with Kaliyev striking twice with the man advantage to tie it. His first came midway through the period, but DeBrincat had his own power-play goal less than two minutes later to give the Senators a 2-1 lead.

Kaliyev then unleashed a blistering wrist shot from the right circle to tie it with 2:25 left in the middle period. It was his first career game with multiple power-play goals, and his six tallies on special teams leads Los Angeles.

“We needed something because we sure didn’t start the game very well,” Kings coach Todd McLellan said. “Power play, obviously, gave us some life. It gave us a chance to crawl back into the game. For as poorly as we were playing, it didn’t get away on us, so that was a good thing.”

There was a lengthy delay midway through the first after a deflected shot by Kings D Sean Durzi cracked the kick plate along the bottom of the boards on the Zamboni tunnel before arena personnel were able to replace it.

Kings F Gabe Vilardi, the team’s leading scorer with 11 goals, did not play because of an upper-body injury. He is day to day.