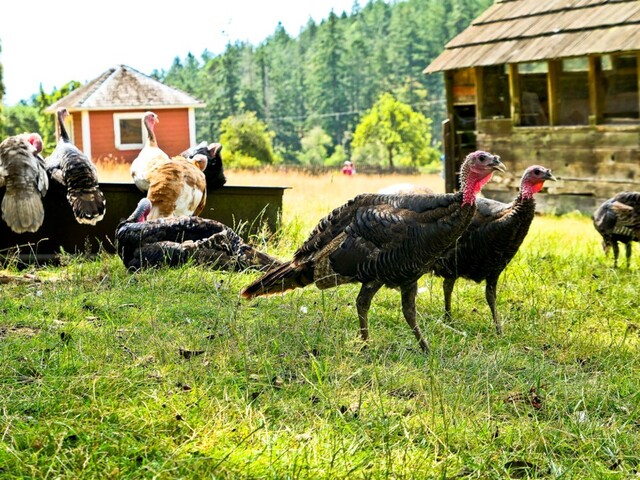 On the Vancouver Island, avian flu outbreaks have been contained to small backyard flocks, but all producers remain on high alert.

One of the Island’s largest ­diversified poultry producers, Firbank Farms, which produces about 100,000 birds at a time on the Saanich Peninsula, has not been affected by the disease and ­continues to adhere to strict protocols.

There are no large-scale turkey ­producers on Vancouver Island, with most farmers raising a few dozen to up to 500.

One of the capital region’s largest turkey producers, Ireland Farms, got out of the business two years ago. The Saanich Peninsula farm had produced about 1,500 turkeys a year.

Bryce Rashleigh of Saanichton Farms has 50 turkeys ready for ­Christmas dinners this year, but those have already been sold.

Rashleigh said he has ordered 50 turkey chicks for delivery on Dec. 22, but with the tenuous avian flu ­situation ­everything is up in the air because Lower Mainland farms that provide stock are managing day to day.

“We have one of the biggest ­producers on the Island out of the ­picture now, farmers retiring and ­getting older, the cost of feed is through the roof and now avian flu … it’s ­knocking everyone in the teeth,” said Rashleigh.

Retailers are bracing for shortages.

A spokeswoman at Glenwood Meats in Langford said turkeys are expected to arrive on Dec. 21, but that could change.

She said Glenwood is not taking orders from customers. “We’re doing first-come, first serve … with avian flu, we have no idea what’s going to happen,” said the spokeswoman. “It’s the same with turkey parts. We never know what we’re going to get or when.”

From the wild to the farm

Avian flu in pets and humans

CFIA says there have been no cases of wild birds passing the virus to humans in Canada, but transmission from pet birds to humans is still a risk.

“Current science suggests that the risk of a human contracting avian influenza from a mammalian pet is very low,” notes the federal agency.

Owners are still encouraged to take appropriate precautions to protect their pets and themselves.

There’s always a potential for low-pathogenic avian flu viruses to evolve into highly pathogenic viruses. Such a novel virus could emerge with pandemic potential among the human population.

“H5N1 infection in humans can cause severe disease and has a high mortality rate,” states the WHO. “If the H5N1 virus were to change and become easily transmissible from person to person while retaining its capacity to cause severe disease, the consequences for public health could be very serious.”

That level of certainty is unlikely to be matched at the grocer aisle this Christmas.

– With Darron Kloster, Times Colonist and The Canadian Press