Kamloops was unable to complete a comeback, falling 3-2 to Moose Jaw Friday 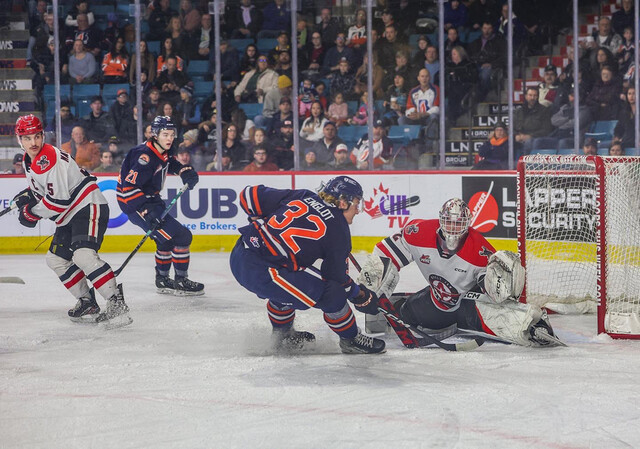 The Kamloops Blazers did everything but find the game tying goal Friday night.

Trailing the visiting Moose Jaw Warriors 3-0 after 40 minutes, the Blazers crept to within a goal, but couldn't manage to find the equalizer in a 3-2 defeat.

Brayden Yager with the teams at even strength beat Michael Schnattinger later in the second to send the Warriors to the dressing room nursing a 3-0 lead.

The Blazers came out flying in the third and were rewarded just 43 seconds in when Logan Stankoven, parked below the left circle, took a backdoor feed from Dylan Kuefler and sent a one-timer past Connor Unger.

Stankoven dropped a pass to Kuefler, whose initial shot from the right faceoff circle was stopped by Unger. Kuefler followed up on his own rebound and, with his momentum carrying him behind the net reached out front and tucked the puck inside the near post.

The Blazers threw 14 shots at Unger during the final 20 minutes but were unable to find the equalizer.

Unger stopped 36 shots fired his way as the Blazers outshot the visitors 38-29.

The Blazers head north to face the BC Division-leading Prince George Cougars Saturday before hosting Connor Bedard and the Regina Pats Wednesday.

Only about two dozen tickets remain for that game.