Ice bugs live in BC 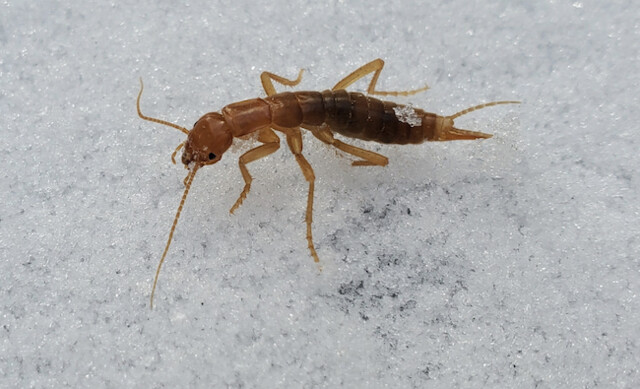 While most insects have disappeared for the winter, the ice crawler thrives in frigid conditions.

A post on the Mount Revelstoke and Glacier National Parks Facebook page gives some insight into the unique critter.

“The ice crawler is a real Canadian icon. First discovered in Banff National Park in 1914, ice crawlers live in the cold on top of mountains, at the edge of glaciers or in cool caves,” the post states.

“In order to survive, the temperature of their surroundings should be not too hot, not too cold but just right. Just the warmth of your hand for an extended period could injure them. They may be seen crawling on snow or rocks and under tree bark looking for smaller bugs to eat.”

The ice crawler is even on the logo for the Entomological Society of Canada.

Wikipedia says grylloblattidae, also known as ice bugs, are a type of wingless insect that are less than three cm long and have a head resembling a cockroach.

“They cannot tolerate warmth - most species will die at 10 C - and many species have small distribution ranges.”

It can get too cold for the bug, so when the temperature drops below their optimal range they survive by living under snowpack near the soil.

And when things warm up, “they move in response to the seasons so as to maintain an optimal temperature in their foraging habitat.”

The Purdue University website says the bugs can be found Japan, Siberia, the northwest United States and Western Canada.

"There are 26 species known worldwide. As glaciers and ice fields recede due to the effects of climate change many grylloblattid habitats are threatened. Grylloblattodea stands as the least known and the most threatened insect order. Conservation efforts are further complicated by an almost complete lack of information on grylloblattid life history, biology, and behaviour."