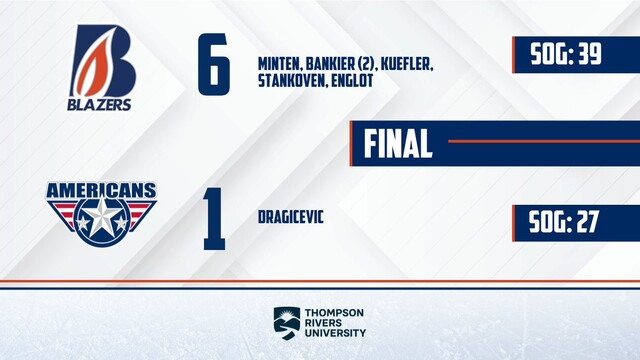 The Kamloops Blazers made the most of a brief trip south of the border.

Daylan Kuefler broke open a tight game in the final minute of the second period, leading the Blazers past the host Tri-City Americans 6-1 Wednesday night.

Caedan Bankier paced the Blazers attack with a pair of goals while Logan Stankoven added a goal and two assists.

Fraser Minten and Drew Englot with his first of the season also lit the lamp for the Blazers.

The Blazers started slow, but power play goals from Minten and Bankier 77 seconds apart early in the second sent them on their way.

Moments after the Americans had cut the deficit to one and time running out in the second, Stankoven stole the puck behind the Tri-City net and spotted Kuefler in the slot.

Kuefler deked to the backhand and slid the puck past Tomas Suchanek.

Stankoven extended the lead six minutes into the third. With a delayed penalty signalled, Stankoven took a pass in the slot, waited until Suchanek went down, and slid the puck into the open side.

Special teams were key for the Blazers in the lopsided win. They hit on two of their three chances on the power play while holding the Americans off the scoresheet on their five chances.

Dylan Ernst turned away 26 shots to earn the victory.

The win allowed Kamloops to stay five points in back of the BC Division leading Prince George Cougars, who also won Wednesday night.