'Close but no cigar:' Jefferson, Bombers reflect on up-and-down season 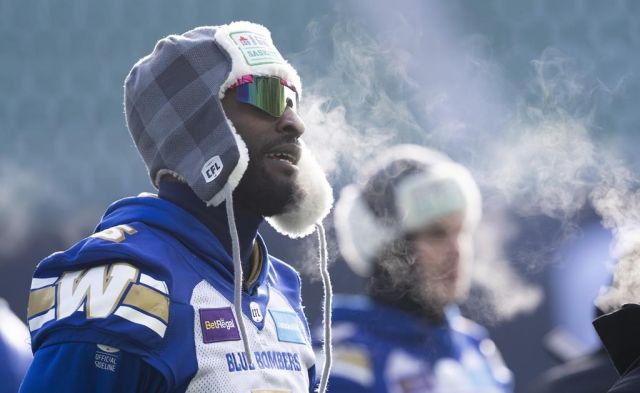 WINNIPEG — Willie Jefferson expects to sign a contract extension with the Winnipeg Blue Bombers soon, and that should start the healing process for the CFL team's disappointed fans.

Players cleaned out their lockers Tuesday after the Bombers' quest for a third straight Grey Cup championship was surprisingly halted by a 24-23 loss to the Toronto Argonauts in Sunday’s 109th Grey Cup in Regina.

“Not in front of me as of right now, but we’re working on it,” Jefferson told The Canadian Press in a phone interview when asked if the pending free agent has been offered a contract by the Bombers.

“I don’t plan on going anywhere so we’ll talk about it and get something worked out soon.”

The popular 31-year-old defensive lineman from Texas had moved his family permanently to Winnipeg last April for his third season with the Bombers and eighth in the CFL.

It ended up being a season to remember for its highs and then the ultimate low of the Grey Cup loss.

The Bombers were the league’s best team and recorded a franchise-record 15 wins (15-3), with those efforts recognized by Winnipeg dominating the CFL's top awards.

The Bombers looked poised to add to their Grey Cup titles from 2019 and 2021, but the underdog Argonauts (11-7) had other plans.

Winnipeg held a 23-14 lead early in the fourth quarter, but Toronto responded with a Boris Bede field goal and then A.J. Ouellette’s five-yard touchdown at 11:36. The convert put the Argos ahead 24-23.

Toronto defensive lineman Robbie Smith then blocked Bomber kicker Marc Liegghio’s 47-year field-goal attempt in the final minute and the Argos ran out the clock. Liegghio had missed a convert earlier in the game.

“Close but no cigar,” Jefferson said to sum up the season. “We had a chance to win, but we just missed so many opportunities.”

Collaros went into the Grey Cup with an ankle injury he sustained late in Winnipeg’s West Division final victory over the B.C. Lions.

He didn’t get specific Tuesday about the nature of the injury.

“I don’t think it was a huge factor,” said Collaros, who was 14-of-23 passing for 183 yards with no TDs and one interception in the title match. He was also sacked four times.

He admitted players were still struggling with the loss.

“Shock and sadness,” he said. “We still feel like we should be getting ready to play again.”

Collaros, who signed a three-year contract extension last month that keeps him with the Bombers through the 2025 season, threw for a career-high 4,183 yards and career-best 37 TDs this year.

“This group of men in that locker room and just the people in this organization made the entire year really special,” Collaros said. “That’s the hardest part about the result.”

He wouldn’t predict what the team’s pending free agents will do and how much change there might be in next year’s roster.

“I’d imagine knowing the character of that locker room and the guys in that locker room, it’s going to be a lot of guys that want to come back and give this thing another go,” he said.

“But at the same time, it’s not my place to make sales pitches and things of that nature. That entire room is just a really special group of people so, hopefully, we have a majority of people back and give this thing another go.”

Fans have criticized Liegghio for his missed convert and blocked field-goal attempt, but Collaros said it’s a team game and “it doesn’t come down to one particular play.”

When asked about Schoen’s future, Collaros said he wouldn’t be surprised if the Kansas State product gets some opportunities in the NFL next year.

Schoen, 26, led the league in receiving yards (1,441), receiving TDs (16) and tied for most TDs with Ottawa quarterback Caleb Evans.

He spent time with three NFL clubs before joining the Bombers and said he’s not sure how workouts in that league will play out.

“My main focus right now is getting a little bit of recovery in, just played a 20-game season,” he said. “That all kind of remains to be seen in the future.”

He is thankful for being part of the Bombers and their special culture.

“That’s why Sunday hurt so bad, right?” Schoen said. “It’s the quality of people in this locker room and in this facility.”

Jefferson will likely bump into a lot of sad fans in Manitoba during the off-season, but he won’t mind the interactions.

“I can’t wait to hear it, just ‘Ahh, you were so close. We’ll get ‘em next year.’ You know, all those little clichés, greetings and things like that,” he said. “It’s tough, but I’m ready for it.”

This report by The Canadian Press was first published Nov. 22, 2022.