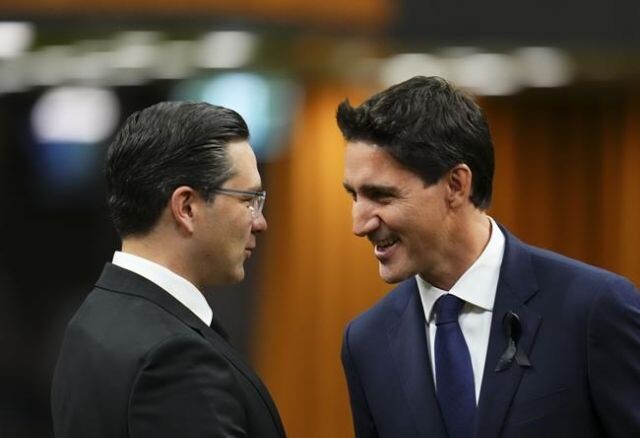 Just 13 months have passed since Canadians last participated in a federal election. The early ballot that was supposed to restore the Liberal Party of Canada to majority status ended with results that were very similar to the 2019 edition: A third of Canadians choosing the Liberals, a third voting for the Conservative Party of Canada and a third voting for candidates representing other political organizations.

Plenty has happened since the September 2021 election. In March 2022, the Liberals and the New Democratic Party (NDP) entered into a supply and confidence agreement that effectively buttresses the minority government until June 2025. The Conservatives chose Pierre Poilievre as their new federal leader, in a campaign that, at times, seemed to be over before it began.

Research Co. and Glacier Media asked Canadians this past week about the issues affecting the country and their voting intention if an election were to take place soon. The numbers outline a struggling Liberal government, deeply affected by the rise of the economy and jobs as a preoccupation for Canadians and losing support in the pivotal battleground of Ontario.

Among Canadian decided voters, the Conservatives are in first place with 35 per cent, followed by the Liberals with 31 per cent. Support is lower for the NDP (19 per cent), the Bloc Québécois (eight per cent), the Green Party (four per cent) and the People’s Party (two per cent).

As has been traditional for years, the Tories can count on massive support in Alberta (51 per cent) and Saskatchewan and Manitoba (47 per cent). In British Columbia, where the Liberals have captured the popular vote only once in this century (in 2015), the Tories have a nine-point advantage over the NDP (37 per cent to 28 per cent, with the Liberals at 20 per cent).

The biggest change is in Ontario, where the Conservatives have a nine-point advantage over the Liberals (41 per cent to 32 per cent). In the 2021 election, more Ontarians voted for the governing party (39 per cent) than for the official Opposition (35 per cent).

These numbers bode well for Poilievre, who is still a contentious figure. More than a third of Canadians (37 per cent) approve of his performance, but a slightly higher proportion (44 per cent) disapprove. Justin Trudeau’s numbers are a bit higher on both indicators, with 44 per cent of Canadians saying they are satisfied with how he’s handling his duties and just over half (51 per cent) expressing dismay.

This month, 29 per cent of Canadians identify the economy and jobs as the most important issue facing the country, followed by housing, homelessness and poverty (21 per cent) and health care (also 21 per cent). The two provinces with the most seats in the House of Commons – Ontario and Quebec – are primarily worried about financial matters right now (30 per cent and 33 per cent, respectively).

Voters across Canada could connect with a leader who they perceive as a better financial steward. At this point, Canadians are not overly convinced about either of the two main options. More than two in five (43 per cent) are comfortable with Trudeau managing the national economy and a smaller proportion (39 per cent) feel the same way about Poilievre.

The key difference on economic management is in how the two largest provinces react. Ontarians are currently more likely to want Poilievre to be handling this file than Trudeau (43 per cent to 40 per cent). In Quebec, the current prime minister is decidedly preferred (42 per cent, with Poilievre at 27 per cent).

Poilievre also has room to grow on the “Best Prime Minister” question, which in the past has served as a tool to measure dissatisfaction with incumbents and emotional connection with contenders. Trudeau currently has a six-point edge over Poilievre (30 per cent to 24 per cent). A ray of hope for the Conservative leader is his high support among Canadians aged 55 and over (31 per cent, with Trudeau at 29 per cent).

The country is split on whether the supply and confidence agreement has been successful. We found that 44 per cent of Canadians are satisfied with the accomplishments of the nascent “don’t call it a coalition,” while 44 per cent are dissatisfied. As expected, most Liberal voters think the deal is proceeding well (70 per cent). However, only 51 per cent of NDP voters concur – meaning that practically half of the base is not particularly thrilled. While NDP leader Jagmeet Singh maintains a good approval rating (46 per cent), his party has not become more competitive outside of British Columbia.

Our first look at federal politics with most of the protagonists who will lead parties into the next campaign leaves more questions than answers. The incumbent prime minister is still regarded as the best possible head of government, but Canadians are not overwhelmingly convinced that the agreement between Liberals and New Democrats has been worthwhile.

There is time to cut some ribbons and introduce policies that will persuade voters that 2025 is not the time for a change of government. In the early days of his leadership, Poilievre has managed to connect with Ontario in a way that eluded his two predecessors. It is too early to know if this is a reaction to economic uncertainty or the start of a realignment of Canada’s political map.

Results are based on an online study conducted from October 24 to October 26, 2022, among 1,000 adults in Canada. The data has been statistically weighted according to Canadian census figures for age, gender and region in Canada. The margin of error, which measures sample variability, is plus or minus 3.1 percentage points, 19 times out of 20.

This column first appeared in Business In Vancouver.