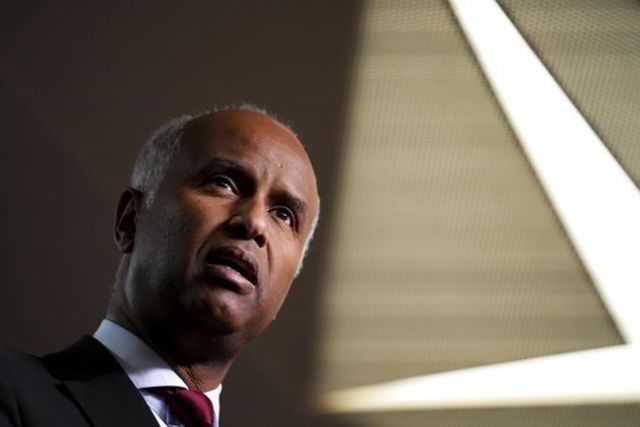 Photo: The Canadian Press
Ahmed Hussen, Minister of Housing and Diversity and Inclusion, holds a press conference on Parliament Hill in Ottawa on Monday, Oct. 3, 2022. THE CANADIAN PRESS/Sean Kilpatrick

Diversity and Inclusion Minister Ahmed Hussen says he wishes he had been able to move more quickly to end the federal government's ties to the Community Media Advocacy Centre after a Liberal caucus colleague first raised concerns about the group this summer.

The House of Commons heritage committee is studying the organization's funding agreement with the Heritage Department after it was revealed that its senior consultant posted a series of tweets about "Jewish white supremacists."

The federal government cut off funding to the group, which was overseeing an anti-racism project, after the tweets from Laith Marouf came to light in August.

Hussen told the committee Friday that Liberal MP Anthony Housefather first shared his concerns about the organization with him on July 19 or 20 and that his office immediately asked the Heritage Department to review the project funding details and keep it in the loop on next steps.

Conservative MP Melissa Lantsman noted to the committee that the decision to end the funding was more than a month after Housefather informed Hussen's office about "Mr. Marouf's vile antisemitism."

Hussen insisted he did act immediately, but the process took time.

Hussen says the funding was approved before he became minister and he trusted that proper vetting was done, but now he's promising to strengthen the process for funding projects.

Marouf's Twitter account is private, but a screenshot posted online showed a number of tweets with his photo and name.

One tweet said: "You know all those loud mouthed bags of human feces, a.k.a. the Jewish White Supremacists; when we liberate Palestine and they have to go back to where they come from, they will return to being low voiced bitches of thier (sic) Christian/Secular White Supremacist Masters.''

This summer, a lawyer acting for Marouf asked for his client's tweets to be quoted "verbatim'' and distinguished between Marouf's "clear reference to 'Jewish white supremacists''' and Jews or Jewish people in general.

Marouf does not harbour "any animus toward the Jewish faith as a collective group,'' lawyer Stephen Ellis said in an August email to The Canadian Press.

"While not the most artfully expressed, the tweets reflect a frustration with the reality of Israeli apartheid and a Canadian government which collaborates with it,'' Ellis added.

In August, Hussen cut $133,000 in Heritage Department funding to CMAC after a public statement about what he called the "reprehensible and vile" tweets. Prime Minister Justin Trudeau said he was launching a complete government review of funding to CMAC.

But asked why his office did not act sooner, Hussen said Friday he wanted to consult the legal department and follow the proper process to cut off funding and end the anti-racism project.

"We had obviously much less information (in July) than we do today," he added, but he did not respond when pressed to explain what he did not know at the time of Housefather's complaint.

Hussen told the committee that new conditions will be added to all federal funding agreements that allow the government to take action if an organization or person is found to have "promoted or shared hate, racism, antisemitism, or discrimination in any form."

Any organization that has its funding cut off will never be eligible for future funding agreements.

Hussen told the committee there will be a renewed and reformed anti-racism strategy, informed by communities including those "that have been attacked by Mr. Marouf directly."