Balanced attack for Blazers in 5-2 win over slumping Victoria 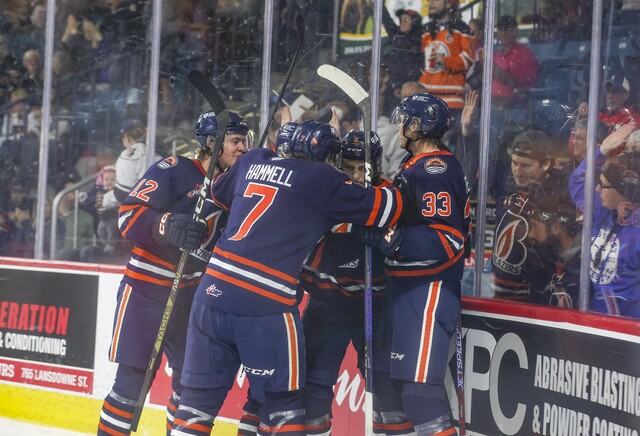 Dylan Sydor and Ethan Brandwood had multi-point performances on Friday at Sandman Centre as the Kamloops Blazers skated to a 5-2 win over the Victoria Royals.

Scott opened the scoring five minutes into the first period, but the Blazers had a 2-1 lead by the first intermission. The teams exchanged goals in the second and Levis and Brandwood scored late in the third to make it a 5-2 final.

Dylan Ernst earned his second win of the season stopping 23 of 25 Victoria shots. Campbell Arnold made 31 saves on 36 Kamloops shots in the loss.

The Royals scored once on five power-play opportunities. The Blazers could not convert on four man advantages.

The win was Kamloops head coach Shaun Clouston’s 500th WHL victory — one of only 10 head coaches in league history to reach the milestone, according to Radio NL's Jon Keen.

Announced attendance at Sandman Centre was 4,226.

The win moves the Blazers to 2-1 on the young WHL season. The Royals move to 0-6 with the loss.

The two teams will do it again on Saturday night. Puck drop on Mark Recchi Way is slated for 7 p.m.

The Kamloops Blazers will be looking to get back on the right side of .500 on Friday when they host the slumping Victoria Royals at Sandman Centre.

The Blazers are 1-1 on the young season, having dropped their home opener to the Portland Winterhawks on Sept. 23 and then skating to a 4-2 road win over the Spokane Chiefs last Friday.

The club is still without a number of core players, including Logan Stankoven and Fraser Minten, who are away at NHL camps in Dallas and Toronto, respectively.

The Royals come into Friday’s game winless in five so far this season. Their most recent loss came in Kelowna on Wednesday, where they were blanked 3-0 by the host Rockets.

The next Blazers victory will be head coach Shaun Clouston’s 500th WHL win.

The Blazers and Royals will play again at Sandman Centre on Saturday. Puck drop both nights is 7 p.m.