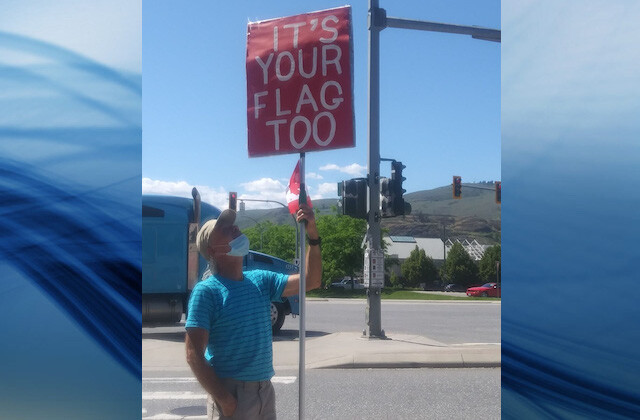 A man at the centre of a scuffle at Vernon's unofficial 'protest corner' at Polson Park last weekend says no one has the right to declare the right to exclusive use of public property.

"No one has the right to declare that because they happened to have been there the week before, they have the right to exclusive use of public land at some future time," Korry Zepik said on Facebook after last Saturday's altercation left him bruised and bloody.

"Does sitting on a park bench a week ago give you the exclusive right to that bench for all time?"

Zepik refutes the 'freedom' group's version of events and says he did not instigate the dust-up, which resulted in police and paramedic responses.

"I do not bump into, push or trip people," he says. "When I start my picket before the anti-COVID people arrive, I am walking back and forth around the corner from street to street as the lights change ... Then protesters arrive and, due to their numbers, they are hard to navigate. At times, I have to step off of the curb to go around.

"Many, many times I have been intentionally nudged, hip bumped, blocked and even swarmed as I pass along the sidewalk from light to light."

But, having said that, Zepik says he wants to offer an "olive branch" to his opponents and he plans to be at Polson Park again this weekend.

"It is time to start looking for shared values so that social discourse goes in a positive direction," he said.

"I am polite and easy to talk to unless people start to shout ... I have initiated many conversations and had good, frank, reasonable discussions with quite a few members."

Still, he says he gets shouted at and sworn at a lot.

"The allegations that I was injuring and spraying women in the face are very nasty and false accusations," he says. "They are saddening to hear. They are a lie, just like the accusation that I am paid by a secret entity to be there."

Zepik says after being told of a person with hearing aids in the crowd, he refrained from using his airhorn near the man.

Refuting allegations he started last weekend's melee and 'jumped' on a protester, Zepik says he pulled a man away who was about spray paint over his sign and the two tangled before falling to the ground.

At a previous rally, he says another man tried to hit him with an aluminum step ladder.

Both the Stand Up Vernon group and Stand with Korry supporters who have sprung up in his defence say they have plans to have large groups at the park on Saturday, raising the potential for conflict.

Both sides say they want things to remain peaceful.