Wake from a boat a factor in 2021 Tofino float plane crash: TSB 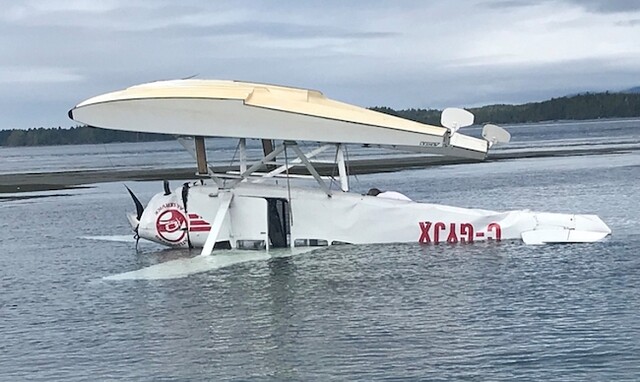 A Cessna A185F float plane lost control during takeoff before cartwheeling and ending up inverted in shallow water in Tofino Harbour last year in part because of the wake from a boat, a Transportation Safety Board investigation has determined.

A passenger in the front seat was seriously injured, while the other three passengers and pilot received minor injuries in the July 26, 2021 crash, which substantially damaged the Atleo River Air Service plane.

Everyone on the plane was able to get out and onto a sandbar.

The TSB said the shallowness of the water on the sandbar helped save the occupants’ lives and gave them time to get out of the aircraft.

Nuu-chah-nulth Tribal Council president Judith Sayers, who was on the plane for the planned flight to Hot Springs Cove, said later she was hanging upside-down with her head underwater after the crash and was pulled to safety by her son, Cole Sayers.

The plane had been scheduled for several flights during the day, and had its first flight delayed by fog. The TSB said takeoff on the flight that ended in the crash was delayed because of boat traffic on its selected path.

When the path cleared, a boat’s wake slowed the plane’s takeoff run, prompting the pilot to try to gain distance with a right turn on the surface of the water.

The aircraft subsequently lifted off the water at a low airspeed, the TSB said, possibly as a result of the wake from a second boat or because of the way the controls were used.

“As the aircraft became airborne at a low airspeed and in a right turn, the left wing stalled aerodynamically at too low an altitude for control to be regained before the wing contacted the water,” the report said.

With winds blowing west-northwest at two knots and no wind chop on the water, weather was not considered a factor.

The report also advised that using estimated passenger weights in planning the flight, as was done, could lead to weights being underestimated if adequate guidance isn’t available. It was not a factor in the crash but could affect future situations, the report said,

After the incident, Atleo River Air Service added 15 minutes to the time between flights to give its pilots more time to complete preflight duties.