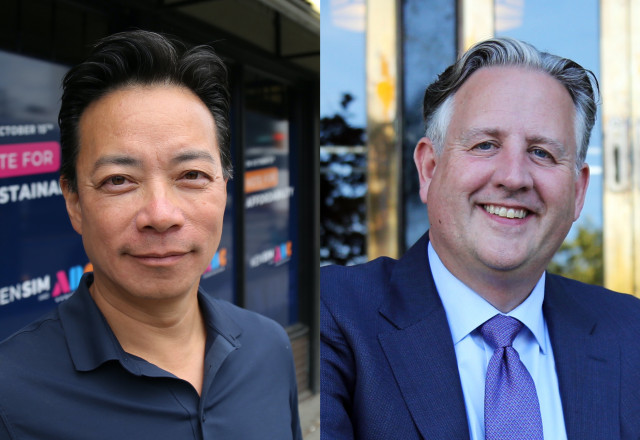 The NDP MLA vying to become B.C.’s next premier and the Vancouver Police Union have both entered into Vancouver’s civic election campaign by endorsing two of the frontrunners for mayor.

David Eby, the MLA for Vancouver-Point Grey, took to Twitter Wednesday and wrote that Mayor Kennedy Stewart — who is seeking a second term at city hall — understands the depth of the housing crisis that people are facing in the city.

“I know he will work tirelessly to increase the number of homes people can afford and I look forward to working with him to deliver results for people,” wrote Eby, who is campaigning to replace the retiring John Horgan as provincial NDP leader and premier.

Earlier in the day, the Vancouver Police Union announced via Twitter that it has endorsed ABC Vancouver mayoral candidate Ken Sim, who is making a second attempt to beat Stewart after narrowly losing to him in 2018.

'Safety is a right'

The union said its endorsement was based on three factors:

• The results of a recent public safety questionnaire survey conducted of mayoral candidates.

• A review by the union’s board of the crime and safety policy planks in party platforms.

In a news release, union president Ralph Kaisers said public safety is the number one issue in the Oct. 15 election. Kaisers said citizens are afraid to walk the streets of their neighbourhoods and small business owners are struggling to keep their doors open.

“The VPU feels safety is a right — for everyone,” he said. “Electing Ken Sim and an ABC majority will ensure that police and other front-line responders will have the resources they need to protect and serve Vancouverites.”

Added Kaisers: “Vancouverites don’t feel safe in their city. The VPU board and its members are committed to taking action to change that – and if it means getting political, so be it. This municipal election, we need to demand accountability out of city hall because safety is a right and everybody deserves to feel safe.”

Sim responded via Twitter to the endorsement, saying it was an honour.

“Public safety is one of the most important issues facing our city today,” Sim said. “Addressing big, complex challenges takes collaboration and a willingness to work together.”

Sim and his party have promised to hire 100 officers, 100 mental health nurses and reinstate the police school liaison program. ABC says it will support a VPD graffiti abatement program and wants police officers on patrol to wear body cameras.

Sim’s party says it will also create a task force to address the dramatic rise in anti-Asian, anti-Semitic and anti-Indigenous hate crimes.

Stewart, meanwhile, has promised to create non-police service teams to respond to situations in the city where homelessness, mental illness, addiction — or all three social issues combined — are causing concerns for residents and business operators.

He has also rolled out an ambitious housing plan to build 220,000 new homes over the next decade, which is a tripling of the city’s current housing target to build 72,000 homes over a 10-year period.

Since he became mayor, Stewart has made it clear that Vancouver needs assistance from the provincial and federal governments to build more housing. The mayor said he has secured more than $1 billion in grants and loans from both governments since 2018.

In an interview earlier this month, Stewart pointed to Eby in response to a question about why wanted to seek re-election, saying there was “a golden opportunity” to advance housing “especially with David Eby coming in as premier.”

The NDP political lineage between Eby and Stewart, along with the fact Forward Together council candidate Dulcy Anderson worked as an assistant to Eby in his constituency office, does not make the endorsement a surprise, although it is rare for a potential premier-in-waiting to wade in to a civic campaign.

Eby, however, has been vocal in interviews and via letters to city hall about the need for Vancouver council to support housing projects such as the controversial 129-unit social housing tower in Kitsilano in July.

Recent polling conducted by Research Co. and commissioned by the Vancouver and District Labour Council revealed another close race between Stewart and Sim; the difference in votes in the 2018 election was 957.

Research Co.’s online study conducted between Sept. 22 and 26 with 422 people found Stewart favoured by 36 per cent of voters and Sim at 34 per cent, with Colleen Hardwick of TEAM for a Livable Vancouver at 14 per cent.