Conservative MPs a no show 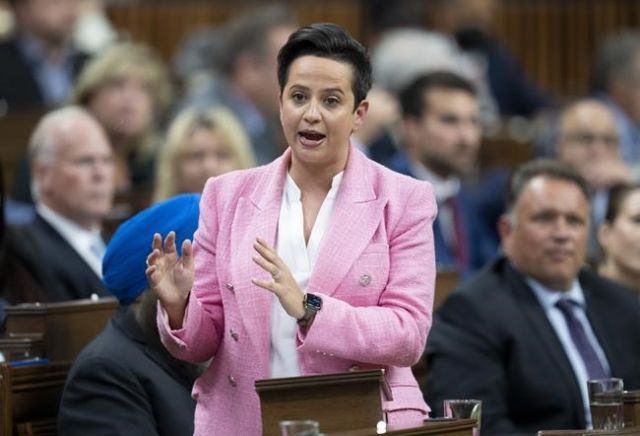 Photo: The Canadian Press
Conservative MP Melissa Lantsman rises during Question Period in Ottawa, Wednesday, Sept. 28, 2022. Lantsman, one of the party's deputy leaders and Eric Duncan, also on its leadership team, were among four Tory MPs who didn't vote when the question was called on a private member's bill surrounding medical assistance in dying.

Three Conservative MPs who were absent from a vote in the House of Commons on conscience rights say they supported the proposed legislation.

Melissa Lantsman, one of the party's deputy leaders, and Eric Duncan, also on its leadership team, were among four Tory MPs who didn't vote on a private member's bill on medical assistance in dying Wednesday.

Dave Epp said late Thursday he supported the bill but has been out of the country so was unable to vote.

Saskatchewan Conservative MP Kelly Block proposed the legislation, which sought to change the Criminal Code to make it an offence to compel a medical professional to "directly or indirectly" participate in the procedure.

The federal Liberal government has said there is nothing in the current laws that force a health professional to “provide or help to provide” the procedure if it conflicts with their personal beliefs.

Ontario’s Court of Appeal has also ruled that allowing doctors to refuse to provide referrals would stigmatize already vulnerable patients and restrict their access to medical services.

Block hails from the social conservative wing of the party, which champions the issue of conscience rights.

Her bill was defeated by a vote of 208 to 115, with nearly all Conservative MPs voting in its favour. The governing Liberals, along with NDP and Bloc Québécois, voted against it.

Lantsman says she voiced her support for the bill in a previous debate and was observing Yom Kippur during the vote.

A spokesperson for Duncan says he was at an international conference and unable to take part in the vote.