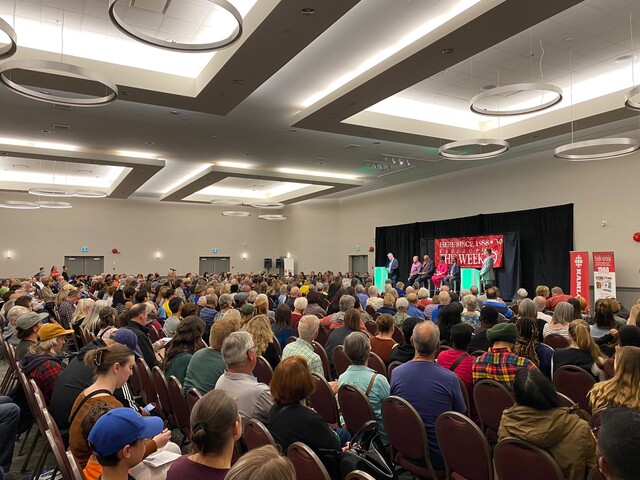 The All-Candidates Forum was co-hosted by CBC Kamloops, Radio NL and Kamloops This Week, moderated by CBC's Doug Herbert and RadioNL's Brett Mineer.

The forum was attended by all five mayoral hopefuls and 21 out of 23 councillor candidates — Darpan Sharma and Reo Rocheleau were absent.

After mayoral candidates took to the stage, councillor candidates were called up in small groups to answer audience questions, including one from an attendee who said many city seniors and those who are disabled rely on transit, but are afraid to take the bus due to social disorder.

“What are you going to do to help out your bylaws personnel to fix the problems at the bus loops?” the attendee asked.

Incumbent Mike O’Reilly mentioned a program in Kelowna where people with lived experience are stationed in repurposed sea cans, working with people in the area to ensure spaces stay safe.

“People that sometimes would scare the seniors, it’s their peers working in it, and they leave the area. It’s had great success and at very minimal cost to do that, and it think that’s something we need to explore in Kamloops,” O’Reilly said.

Randy Sunderman said the city is coming up to “full compliment” with the community services division, and said areas like bus loops should be prioritized for “getting boots on the ground.”

Sunderman also noted a restorative justice pilot project in Kelowna, saying a program like that would ensure some of the individuals causing social disorder are held to account for their actions.

“People that maybe don't need to go to jail, but have some consequences with their behaviour, we need to advocate for a pilot project similar to that here in Kamloops,” Sunderman said.

Darrell LaRiviere advocated for a housing-first approach to get homeless people off the streets, saying housing without preconditions needs to be a priority.

A member of the Kamloops Cycling Coalition asked some candidates if they agree the city needs more safe and efficient cycling networks.

Jordan Proctor said with increasing infill development and urban density, people need another methods of moving around the city.

“If we build these super dense environments and our active transportation network is not adequate or safe, we’re back to that — addicted to the automobile culture. We’re just going to have traffic and congestion, which is a big issue of concern for people when we talk about urban density. I definitely support it,” Proctor said.

Jamie Allen said he is “blown away” there are active transportation trails in the city that “end the middle of nowhere,” and said he supports seeing pathways connected to outlying areas, like from Valleyview to Dallas and Monte Creek.

Other council candidates were asked by a representative from the Kamloops Centre for the Arts if they were in favour of a performing arts centre for the city.

Daphane Nelson said she fully supported any facility that would help draw tourism, but would want to ensure a PAC “is covering its operational costs as well as our debt servicing every year.”

Jesse Ritcey noted there hasn’t been a facility of this type built in Kamloops for about three decades, and said these types of amenities help retain current residents and attract new ones.

Ritcey said he wants to draw on an idea brought forward by O’Reilly — bundling a centre for the arts with other proposed amenities into a comprehensive, costed plan including asset management.

“Then people will have to decide, do we want to be a city that grows and attracts people and offers people amenities? Or do we want to not do anything and have people leave? And that’s the choice that we're facing,” he said.

Caroline King said she needs to see an updated proposal for a centre for the arts, noting that building costs have skyrocketed since the project was brought forward for consideration.

“If I saw a proper proposal that I could actually chew my teeth on, and sort of wrap my head around, I could maybe get to a place where I can say yes, but for right now as it stands, I would be against an art centre,” King said.

Francois Lambert said he would be happy to look at this if elected, while George Dersch said he would want to see industries pitch in to fund the centre.

Stephen Karpuk said he was in favour of a performing arts centre, but noted the city can’t grow without looking at all aspects of its infrastructure.

“We have to look at a comprehensive plan that will include not just the buildings, but the infrastructure and materials and the equipment that will be needed to make sure that they're safe and we're safe going forward,” Karpuk said.