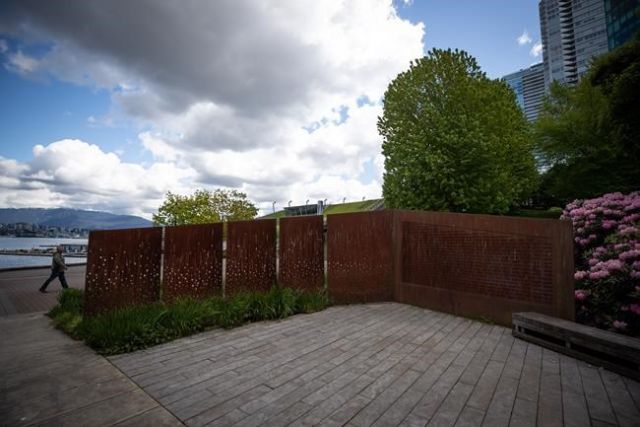 Photo: The Canadian Press
The Komagata Maru memorial is seen in downtown Vancouver, on Tuesday, May 18, 2021. Vancouver police are investigating a new incident of vandalism of the memorial on the downtown waterfront, and whether it's connected to the recent smashing of the nearby Olympic Cauldron. THE CANADIAN PRESS/Darryl Dyck

Police are investigating the vandalism of the Komagata Maru memorial on Vancouver's downtown waterfront, and whether it's connected to the recent smashing of the nearby Olympic Cauldron.

The VPD says it launched an investigation Tuesday after being alerted by a social media post that the glass covering the memorial in Coal Harbour had been shattered.

Const. Jason Doucette says officers are looking into any links to what he called a "similar crime" in which glass sections of the Olympic Cauldron less than 200 metres away were smashed on Saturday morning.

The memorial records the names of almost 400 people who sailed to Vancouver from India aboard the Komagata Maru on May 23, 1914, but were denied entry to Canada even though they were British subjects.

It's the second time the memorial has been vandalized in 14 months, after it was splattered with white paint and handprints in August last year.

A man was arrested and has been charged with mischief over the earlier incident.

“We don’t just want to find the person who did this, but also understand why this cherished memorial was targeted,” said Doucette in a news release about the latest attack.