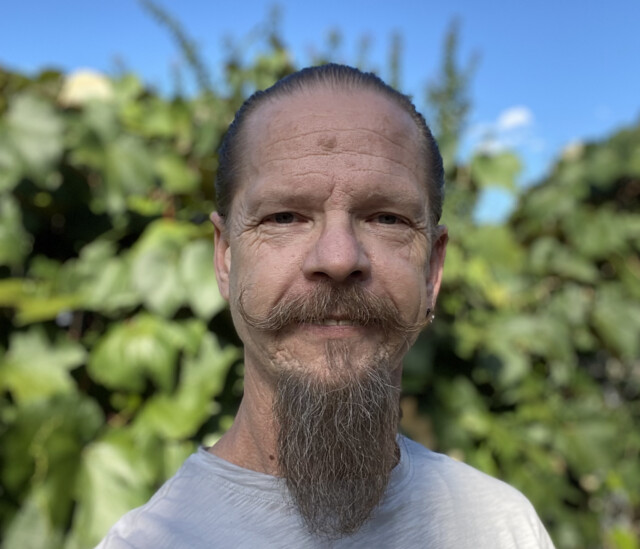 Corey Hounslow is the proud small business owner of Valley Ink in Penticton.

Castanet: Why are you running for mayor?

Corey Hounslow: Well, after 30 years plus of living here and slowly watching our town decline, I finally decided you can't complain about something unless you're willing to step up and try and make a difference.

C: Over the past four years, you were not serving on council. Can you point to some decisions that council made that you agreed with, and some you disagreed with?

CH: Right off the top, I'd have to say I disagreed with the way that they pushed the bike lane through, didn't give people a choice. There was no referendum, there was no vote on whether we needed a bike lane, it was just 'Here, have a bike lane.'

What they've done, that's been good ... I really have a hard time coming up with something that I could pinpoint and say they did a good job there. Every time you turn around, they're trying to ruin another part of Penticton. And it just doesn't make any sense to me. The flow of this town is getting choppier and choppier. All the time. The traffic is getting more intense and it just doesn't make for a good business climate downtown.

C: So, in your opinion, the city's role would be pushing to lobby the province to get more involved?

CH: We have to work with other municipalities to go after the province to put things back to right.

C: Another issue facing Penticton is crime, often property-related. What role does the city play in tackling that? Is the answer more RCMP/bylaw officers, or something else?

CH: Well, the problem here is the fact that it's become a situation where there are no consequences for any of these things. They commit a crime, they're back out on the street the same day so there really is no consequence to petty crime. Without consequences, there's no change.

What we would have to do is band together with other municipalities to work with the province to try and change the criminal codes. We need to get more appropriate sentences for the crimes that are going on because it's all starting to escalate.

Adding more RCMP and bylaw is not really going to be an answer. Without the consequences at the end of the court system, throwing more officers at it really isn't going to change the problem. The police are out there making arrests, the bylaw, I see them daily out there rousting the homeless and so on. It's not going to make a difference to throw more bodies at the problem until there's a solution at the other end.

C: Stock is low and prices are high in Penticton for renters, and first-time buyers are feeling priced out. Given Penticton's limited footprint, how do we grow housing stock to allow more people to live here?

CH: As far as housing goes, that's one of the biggest problems in all of British Columbia and Canada as well. At this point, it's a municipality issue. What it comes down to is in the last five to 10 years most of the rental stock of of houses that were available for families, et cetera, to move to Penticton live in Penticton exist in Penticton have all been converted to Airbnb. So if we take away all the available rental houses, turn them into little mini hotels and charge exorbitant prices for them, eventually what we have is a community full of businesses that have no employees and the community is going to fade. So we need to go through and we need to rework the entire rental property system here in Penticton. We need to make some severe changes.

Without growth, we're becoming stagnant. We have nowhere to go in town as far as housing so now we have to step outside of those boundaries and maybe we're gonna step on some NIMBY feet. The problem there is those are the same people that when they wanted to build their big house on the bench, everybody said no. But now somebody else wants to do something and it's their turn to say no. So we need to we need to look aside from the minority and look at the majority, and the majority says we need housing.

C: What do you think the city the municipality's role should be in attracting new business and fostering existing businesses?

CH: As far as attracting and fostering new business I'm going to have to do a full U-turn and go back to housing. You can't open a business in Penticton if you can't live here, you can't get a job at one of the businesses in Penticton if there's nowhere to live. Everything about our problem right now comes back to housing. You can look at it in many different ways but when it comes down to it, a lot of the people that we're referring to as homeless are not so much homeless as vagrants. The ones that are homeless are the families that are living in their car, taking their kids to school every day, going to their jobs and and trying to survive because they can't find a place to live.

C: If you had $1 million to spend on anything for the city, how would you spend it?

CH: I would sink it directly into our first responders, fire department, EHS. We need to work on getting them the assistance they need. We need to get more people in the fire department. We need the equipment. There's so many things that are necessary in that area.

C: Assume you're elected. Four years from now, the end of your first term, what's different? What have voters gotten that you have brought to them?