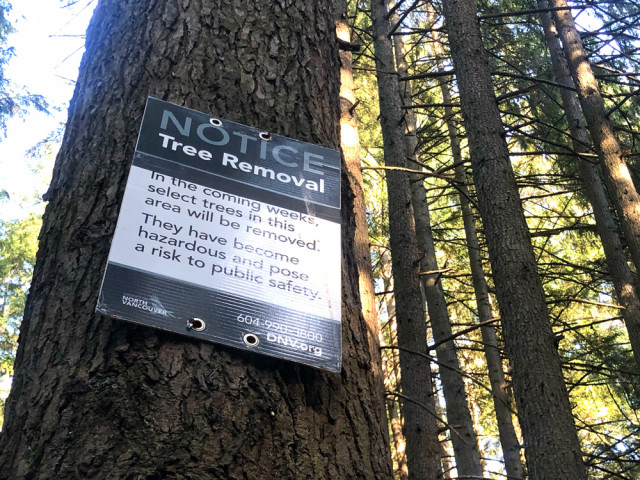 A worker has been killed in a tree falling accident in Princess Park, North Vancouver RCMP say.

Around 11:40 a.m. on Friday, first responders were called to a medical emergency involving an arborist, just east of the children's playground in park.

Police are not releasing the name of the victim, although Sahak said he was a man in his 30s. The RCMP have ruled out criminal wrongdoing in the case and WorkSafeBC and the BC Coroners Service are now investigating exactly what happened in the incident.

“Those details are not quite clear yet,” Sahak said.

The District of North Vancouver, which owns Princess Park, did not immediately respond to a request for comment.

A sign affixed by the district to a tree at a nearby trailhead notifies park users of tree removal, with a message: "In the coming weeks, select trees in this area will be removed. They have become hazardous and pose a risk to public safety."

“We'd like to extend our condolences to the victim and his family. It's a very tragic incident. We're working with WorkSafe BC, BC Coroners Service to do a fulsome investigation and, obviously prevent similar tragedies in the future,” Sahak said.