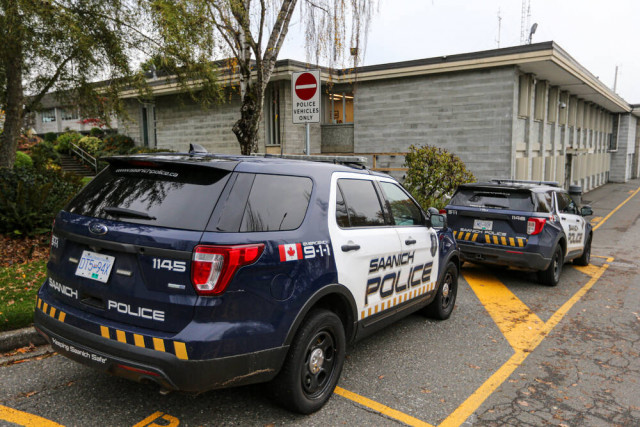 Several reports of a man brandishing a knife and driving erratically through Saanich and Victoria on Sunday ended in the arrest of a 36-year-old man.

No one was injured.

“This multi-jurisdictional incident could not have been remedied so quickly if not for the excellent awareness and communication of the witnesses involved,” said Det. Sgt. Damian Kowalewich in a news release.

Reports started to come in at 12:40 p.m. Sunday of a male driving a Chevrolet Aveo erratically in Victoria.

Shortly afterward, another caller reported the driver had exited his vehicle and brandished a knife at another driver.

Another caller also reported being confronted by a male with a knife.

The erratic driving continued with the driver of the Cheverolet Aveo failing to stop at red lights, passing unsafely and speeding, Saanich police said.

Another witness then reported the driver in the Save-on-Foods grocery store parking lot at Saanich Plaza.

Saanich and Victoria police officers were able to de-escalate the situation and talk to the man, who was in crisis “and had what was believed to be a self-inflicted wound to his body,” Kowalewich said.

It was fortunate that no one else was injured “given the overall erratic driving and behaviour of the driver,” he said.

A 36-year-old Greater Victoria man was apprehended under the Mental Health Act and provided medical and mental health-related care. Once assessed, he was arrested for two counts of assault with a weapon, possession of a weapon for a dangerous purpose, and uttering threats.

Police learned the man was on parole and had an outstanding warrant for his arrest. He remains in custody.