How can local politicians stem the toxic drug crisis? 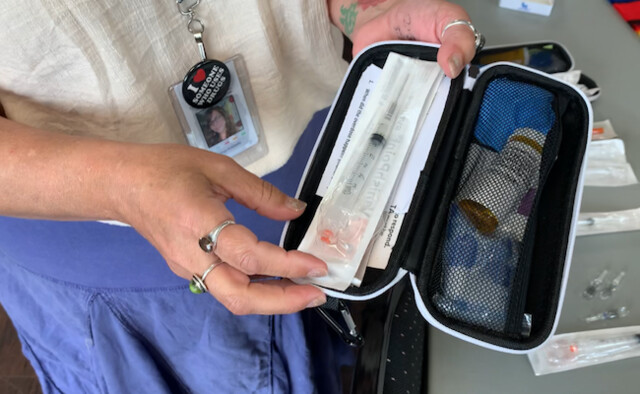 Traci Letts says her 30-year-old son might not have moved from their family home in Langley if there had been an overdose prevention site in  town.

Instead, he now lives more  than an hour away from his support network of family and friends in  Vancouver’s Downtown Eastside neighbourhood, where he can more easily  check his drugs and use them with others nearby in case he is poisoned.

“I’m a mom and my kid had to leave because  he wasn’t welcome here. And that just isn’t right,” said Letts, an  organizer with advocacy group Moms Stop the Harm. She estimates her  daughter has lost at least five friends in the last year to drug  poisonings.

“Living out here is not easy, and what they have to put up with is horrific.”

About 10,000 people have  been killed by toxic drugs in B.C. Langley, where at least 285 people  have been killed since 2012 with at least 30 so far this year, is not  the only place advocates say is in dire need of harm reduction services.

Evidence has shown repeatedly that overdose  prevention sites save lives and connect people to health, housing and  social supports.

No one has died at an overdose prevention  or supervised consumption site in B.C. since the first sanctioned sites  opened in 2016, according to the BC Coroners Service.

But amid skyrocketing demand, people who  use drugs and their advocates say municipal governments across the  province continue to stand in the way of new sites and bog down existing  services with overzealous bylaw enforcement and constantly changing  licensing requirements.

“Over time and since the declaration of the  public health emergency, we’ve been seeing more and more tactics to  thwart OPS at the local level, not just zoning but introducing new  nuisance bylaws and denying business licences,” Caitlin Shane, drug  policy staff lawyer at Vancouver-based non-profit Pivot Legal, told The  Tyee.

As voters head to the municipal polls on  Oct. 15, Letts and Shane want to remind all levels of government and  health authorities of their power and legal duty to take action to  prevent toxic drug deaths.

“It’s becoming impossible to ignore and  increasingly devastating for communities who are losing people while  they try to set up these services,” said Shane.

In 2016, then BC Liberal health minister  Terry Lake issued a ministerial order requiring health authorities to  establish overdose prevention sites in any community where there is  need. In 2020, the province announced further funding for the sites.

By that sole criteria, every community in B.C. qualifies, say Shane and Letts.

But there are just 36 sites in B.C., with  seven of these in the Vancouver Coastal Health region and nine in  Victoria. Surrey has one site, the only permanent site serving the  entire Fraser Health region, B.C.’s most populous.

Ann Livingston, an organizer who helped run  Vancouver’s first unsanctioned overdose prevention site in the 1990s,  says many of the troubles with expanding services come down to finding a  suitable location.

Many landlords are hesitant to lease to an  OPS, a problem Vancouver and Victoria city councils have alleviated by  leasing city-owned buildings directly to overdose prevention site  operators in recent years.

In Nanaimo, Surrey and  Chilliwack, municipal policies and business licence denials and  terminations have made barriers even higher for overdose prevention  projects.

Last spring, Surrey’s city council  cancelled a business licence to Surrey-Newton Union of Drug Users after  they obtained a lease for a second site, a decision the group appealed and lost at the B.C. Supreme Court.

In Dawson Creek, the SNOW drug user rights group has also been denied a business licence while it advocates for a rezoning request to allow an overdose prevention site without one.

In Nanaimo, where Livingston is a volunteer  co-ordinator for Nanaimo Area Network of Drug Users, their resource and  support site in an empty parking lot sees up to 200 people per day.  It’s not technically designated as an overdose prevention site, but many  people choose to come there to use drugs because they don’t want to go  to the smaller site run by the Canadian Mental Health Association.

But NANDU have had to jump through hoops to  get a business licence when one wasn’t previously required, been told  not to put up open tents to run programming and to shoo people away by  evening, as early as 6 p.m., says Livingston. “They treat us like we’re  criminals,” she added.

The site is entirely volunteer-run, and  Livingston says seeking approvals and support from councils and health  authorities is a huge challenge for peer-run, small organizations across  the province. “We’re just trying to cope with the people coming to our  lot, who need help, who need a meal,” she said.

In Prince George, for example, the POUNDS  Project has consulted on bylaw changes to allow inhalation of drugs, now  a primary mode of administration for the majority of people visiting at  its site and gained funding to extend hours in the summers, says  executive director Jordan Stewart.

When municipalities and local police  departments often stand in the way of overdose prevention sites, Shane  says the province and health authorities have a legal obligation to step  in.

“Need is the sole criterion required to  establish OPS in a community,” reads a recent brief she wrote on the  issue. “All other factors, including local government or public  perspectives on harm reduction, are irrelevant by comparison.”

And because the province is in charge of  health care delivery, Shane says it can exercise paramountcy to allocate  public land and bypass municipal barriers to new overdose prevention  sites.

Paramountcy is a legal principle embedded  in B.C.’s Interpretation Act that recognizes the province is not bound  by local government decisions when it comes to issues within its  jurisdiction and involving publicly owned land. The government used it in 2019 and 2021  to build homeless shelters in Maple Ridge and Penticton in the face of  local inaction and opposition to proposed provincial projects that were  already fully funded.

“There’s a proclaimed powerlessness to do  anything,” said Shane of the toxic drug crisis. “I find it very hard to  believe that there’s nothing they can do, because they’ve done it in  other contexts.”

Livingston and Letts agreed their  respective health authorities haven’t been forceful enough in  establishing overdose prevention sites when needed. They want to see the  health authority building the sites or leasing buildings on their  behalf.

For now, Letts and others are planning to  set up a site on public land in Langley for a few weeks to demonstrate  the need to council and the community, and asked Fraser Health to fund  the unsanctioned site.

In Shane’s opinion, a failure to set up  these services could make health authorities and the province vulnerable  to legal action.

“They must set up these spaces wherever  there is need. It’s not an encouragement or suggestion, it’s a legal  order,” said Shane. “Arguably they’re failing their legal obligations  and duty of care.”

POUNDS’ Stewart hopes more municipalities  across the province take a page from Prince George’s book to work with  harm reduction organizations rather than against them.

“We’re the closest to the individuals  experiencing the problem,” she said. “Municipal government is our foot  in the door for policy change and solutions to the problem.”