Salute to the Sockeye 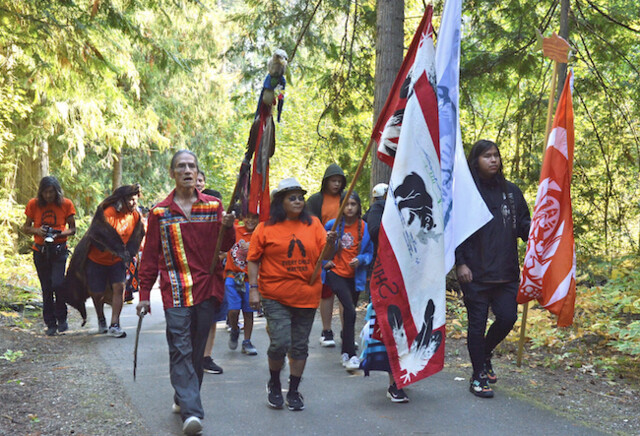 Photo: Wayne Emde
Flag bearers representing the five bands that took part in the opening ceremonies lead about 300 visitors to the banks of the Adams River for a solemn ceremony welcoming the salmon back.

Hundreds of visitors arrived at Tsútswecw Provincial Park on Friday for the opening day of the Salute to the Sockeye Festival to welcome the annual salmon run.

After a welcoming address by Elder Ethel Billy of the Adams Lake Band, the Thunder Bear Drummers performed the Honour Song before Jamie Tomma spoke of the need for everyone to start working together to save the salmon runs.

Elder Virginia Tomma offered an opening prayer, thanking the Creator for the forest, trees and a good night’s sleep.

Joyce Murray, Minister of Fisheries and Oceans, noted it was an auspicious day and that her ministry was committed to the restoration of damaged sockeye habitat. She noted that thousands of students had visited the park and had an increased understanding of its importance. She also referred to the delayed arrival of the salmon this year due to low water levels and warmer water in the rivers.

“All the salmon runs have suffered,” she said.

MP Mel Arnold thanked the volunteers and said there was a need to work towards understanding cultures and that there was more to be learned through connections.

Murray and Arnold were presented with new versions of traditional Hudsons Bay Blankets created by the Gord Downie Foundation as a way to address the role of the HBC in colonization.

The Ojibwe “Oshki Wupoowane” or “a new blanket” in English, was chosen as the name of The Blanket Fund in collaboration with Chanie Wenjack’s family with 100 per cent of all proceeds from the sale of HBC point blankets going towards support for Indigenous cultural, artistic and educational activities.

After the initial speeches and welcoming songs, hundreds of attendees followed the flag bearers and drummers to the shores of the Adams River for a solemn ceremony to welcome the salmon back.

The day continued with singing, drumming and dancing, story telling, cultural displays and a feast of locally caught salmon, harvested vegetables and soup.

Chef Steven Teed created the feast, preparing 600 meals and 200 bowls of soup which were offered free to the visitors.

The Salute to the Sockeye festival continues through Oct. 23, with the arrival of the bulk of the sockeye expected in about a week.