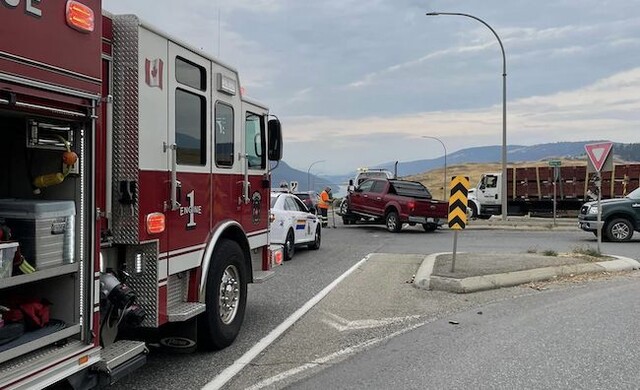 The son of a man involved in Thursday's crash at the top of 'Dump Hill' on Highway 97 says he hopes something will finally be done to improve the notorious exit from the Vernon landfill.

The spot has been the scene of numerous collisions over the years, as the left turn to get back into Vernon is right at the crest of the hill, with limited visibility, and traffic is moving at high speed in both directions.

A fiery crash in January at the intersection claimed the life of one driver.

Over the years, there have been calls for either an underpass or overpass at the intersection.

While there is an exit lane to turn right into the dump, there is no merge lane for traffic turning left out of Birnie Road.

Ian Morton says his father was pulling out from the dump in his pickup, looked both ways, went to cross, and collided with a loaded fruit truck that came up over the crest of the hill.

The incident spilled part of the fruit truck's load and closed the highway for a short time.

"I can happily report that he did not sustain any notable injury, despite his head going against the side window hard enough to crack the glass," says Morton.

It's not believed the fruit truck driver was harmed in the crash.

The incident does have Morton calling for change at the intersection, however.

"I really hope this might aid in getting the dump road rerouted, so no more events like this occur. It's scary to think my dad could have been killed yesterday," he said.