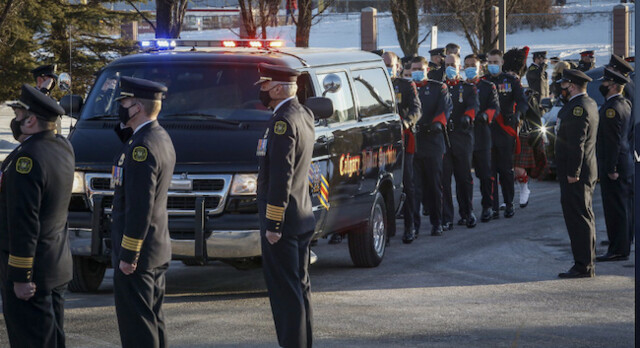 Photo: The Canadian Press
An honour guard marches following the casket at the funeral service for Calgary Police Service Sgt. Andrew Harnett in Calgary on Jan. 9, 2021. A Crown prosecutor says testimony from a teen charged with first-degree murder in the hit-and-run death of Harnett is "vague and unreliable," but the accused's lawyer says his client is telling the truth and simply made an "immature" decision.

A Crown prosecutor says testimony from a teen charged with first-degree murder in the hit-and-run death of a Calgary police officer is "vague and unreliable," but the accused's lawyer says his client is telling the truth and simply made an "immature" decision.

Sgt. Andrew Harnett died in hospital on Dec. 31, 2020, after being dragged by a fleeing SUV and falling into the path of an oncoming car.

The alleged driver, who cannot be identified because he was 17 at the time, has testified he was scared when Harnett and another officer approached the vehicle during a traffic stop and he saw Harnett put his hand on his gun.

Prosecutor Mike Ewenson said the evidence shows there's no doubt the teen, who is now 19, meant to cause harm to Harnett.

"The young person's evidence should be totally dismissed. It is purely self-serving and, quite frankly, it's the only thing he can say. He can't say he didn't do it," Ewenson told Court of King's Bench Justice Anna Loparco. "He is vague and unreliable."

Ewenson said there is no evidence to corroborate the teen's testimony that he was in a state of panic and felt he was mistreated because of his race.

"He is so self-assured he calls the officer brother three times. He's entirely unaffected, confident and conversing with the officer," said Ewenson.

"What you have is Sgt. Harnett being polite and the young person is fine."

Ewenson showed a number of videos, including some from a body camera that Harnett was wearing and others with a bird's-eye view from a helicopter.

"You'll see his arms swinging from side to side. His body language is that of one being totally relaxed and there's no urgency on the part of any of the officers. No signs of enhanced risk, nothing that would suggest that any of the officers would have use of force on their minds," Ewenson said.

"The stop was lawful. It was not one of racial profiling. Not one done for any unprofessional or nefarious reasons. Although the young person has brought up topics such as racism and police abuse."

Ewenson said there was "no hand on the gun" and called that statement "concocted."

The prosecutor said Harnett was attached to the fleeing car for a total of 427 metres from where the vehicle took off to the point he fell off. The vehicle was doing double the posted speed limit, he added.

"I am not asking for a conviction of murder because a professional officer died and I'm not counsel for Sgt. Harnett standing before you advocating for his good reputation. We don't reward our police for being professional," he said.

He said the teen was also aware Harnett was attached to his vehicle but still sped away and opened the door in an attempt to shake him off.

"The young person, in the Crown's view, meant to cause Sgt. Harnett bodily harm, which he knew was likely to cause his death and he was reckless whether death ensued or not."

The teen's lawyer said his client is guilty of nothing more than manslaughter.

"What was in the young person's mind during the 35 seconds that the flight from the traffic stop transpired? Our submission will be he is truthful when he says he neither intended that consequence nor did he foresee it," Zachary Al-Khatib told the court.

"He saw what he saw and he panicked. He made a bad decision that he regrets … a juvenile decision, an immature decision but that decision was not to murder Sgt. Harnett."