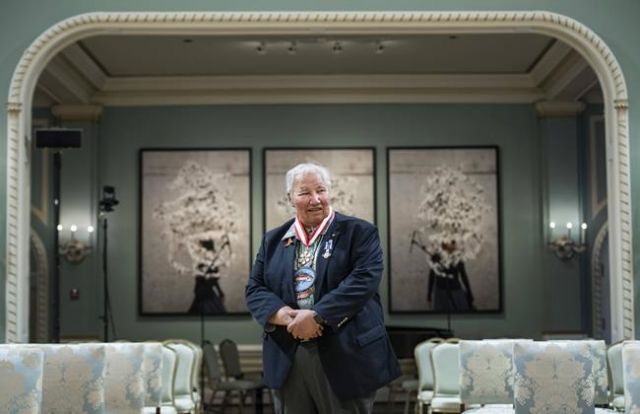 Photo: The Canadian Press
Justice Murray Sinclair, who was Manitoba’s first Indigenous judge, led the Truth and Reconciliation Commission and served as a senator, stands in the ballroom at Rideau Hall after being invested as a companion of the Order of Canada and receiving a Meritorious Service Decoration (Civil Division), in Ottawa, Thursday, May 26, 2022. Sinclair says the argument the federal government made in 2015 that the Catholic Church was unlikely to raise the money it promised to residential school survivors is "blatantly dishonest." THE CANADIAN PRESS/Justin Tang

The former head of the Truth and Reconciliation Commission says the argument Ottawa made in 2015 that the Catholic Church was unlikely to raise the money it promised to residential school survivors is "blatantly dishonest."

Murray Sinclair, a former senator, also believes the current Liberal government should seek outside legal advice on the final agreement that released Catholic entities of their remaining financial obligations, including raising $25 million for survivors.

"I don't think that Justice Canada has come out very well, not only in regard to this, but with regard to other matters, including the fact that it advocates so strongly against the interests of survivors," he told The Canadian Press in an interview earlier this month.

"I think that relationship needs to be looked at more closely."

Documents released to The Canadian Press through an access-to-information request detail the reasons Ottawa decided not to appeal a 2015 court decision that ruled in favour of Catholic entities that were party to the historic Indian Residential Schools Settlement Agreement.

The 2006 agreement included a group of Catholic entities who signed on to provide financial compensation to residential school survivors, including by way of a $25-million fundraising campaign.

The matter ended up before a Saskatchewan judge, who in 2015 ruled the Catholic entities were free of their remaining obligations in exchange for a payment of $1.2 million.

By that time, the Catholic groups had raised less than $4 million of the $25 million promised, and the court decision allowed them to walk away without fulfilling the rest of the pledge.

Canada was in the middle of a federal election at the time, but internal briefing documents show that the Conservative government of then-prime minister Stephen Harper chose not to appeal.

The briefing notes contain a copy of the signed agreement Canada struck with the Catholic entities following the court ruling. It shows Canada agreed to "forever discharge" the Catholic groups from their financial obligations under the residential school settlement agreement.

The documents also show that one of the considerations officials weighed when deciding whether to appeal the court decision had been that they felt the chances of being able to compel the Catholic entities to meet the fundraising promise were "very low."

He said Catholic entities own "considerable properties" across the country, which they could have disposed of to finance their fundraising campaign.

"That's what they should have done."

The office of current Crown-Indigenous Relations Minster Marc Miller didn't respond to a question about whether he has sought outside legal review of the 2015 final release agreement, or whether he plans to.

The Canadian Conference of Catholic Bishops, the national assembly representing Catholic leadership in the country, has acknowledged that the first fundraising campaign was a failure that sowed significant disappointment and anger among residential school survivors.

The conference was not a party in the initial settlement agreement.

Nonetheless, in fall 2021 it committed to undertake a new drive to contribute $30 million to reconciliation-related initiatives over five years.

The conference released a statement on Thursday that says 73 Catholic dioceses have committed to paying into the fund, which has been registered as a charity.

So far, $5.5 million has been raised in that campaign, the statement says.

More scrutiny has been applied to the steps the Catholic Church in Canada has taken to make amends to residential school survivors since last year.

That's when First Nations across Western Canada began announcing that ground-penetrating radar technology had confirmed the presence of what are believed to be unmarked graves at the former sites of residential schools.

More than 150,000 Indigenous people were forced to attend the institutions, where many suffered physical and sexual abuse, as well as neglect and malnutrition. A majority were operated by the Catholic Church.

Friday marks the second National Day for Truth and Reconciliation to honour survivors of the system and the children who died.