‘Action is better than words’: Syilx elder calls for better protection of water and land 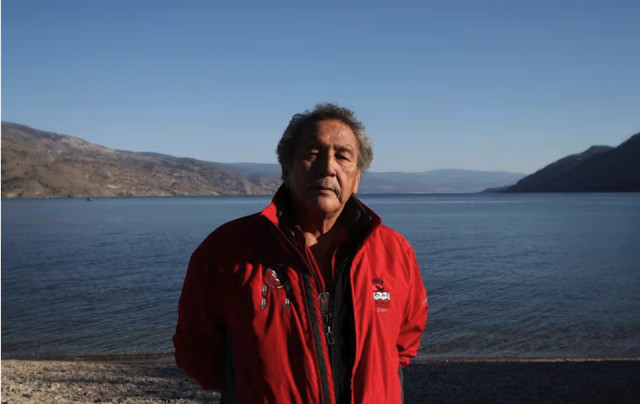 Following a water ceremony at the shore of Okanagan Lake, a Syilx elder and knowledge keeper calls for more action to be taken when it comes to addressing pollution and illegal dumping.

“All I can say is action is better than words,” said Wilfred “Grouse” Barnes of Westbank First Nation. “To take action, to really just get out on the land, get your hands dirty picking up stuff — walk and talk.”

Ahead of the ceremony on Sunday, Barnes and his wife, Pamela, were invited to attend the Peachland Watershed Protection Alliance community cleanup event in honour of World Rivers Day, which saw dozens of “Peachland” residents come together to pick up garbage in and around the Hardy Falls area.

During the water ceremony, Barnes read from the Syilx Nation’s siw?k? (water) declaration, which outlines the Nation’s commitment to honouring and protecting the resource.

Afterwards, he smudged people in attendance and invited them to make a tobacco offering to the water.

“Us elders, us Syilx people, this is our land. This is our water. For us to help protect it, to help keep it clean, is far better than just talking about it,” he said.

Every year, PWPA partners with community members and organizations such as Okanagan Forestry Task Force to clean up illegal dumpsites and abandoned vehicles left within the Peachland watershed, which spans about 124 square kilometres west of Okanagan Lake and provides drinking water to the community.

While the community cleanup around Hardy Falls on Sept. 25 saw only a handful of garbage bags filled with litter along creeks and streams, industrial garbage bins were packed with garbage collected during the Peachland watershed cleanup on April 30.

Kane Blake of the Okanagan Forest Task Force said that since the organization’s founding in 2016, they’ve cleaned up over 400,000 pounds — about the size of a passenger jet plane — of illegal dumpings from across the Okanagan.

Barnes praised PWPA for the work that they do in protecting and cleaning up the water and the land.