Heckler kicked out of forum 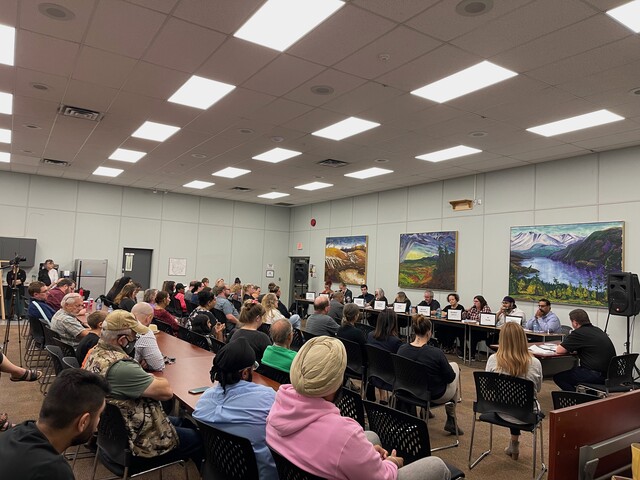 Collaboration was a common theme Wednesday at an all-candidates forum for those seeking Kamloops seats on SD73’s board of education — a meeting that was briefly hijacked by an anti-SOGI protester who accused most of those in attendance of being members of a “sex cult.”

Each of the 10 candidates took part in the forum, which was held at Henry Grube Education Centre and drew a crowd of about 100. Organizers had to remove a partition and create additional space to allow for all the attendees.

The first question asked of the candidates was straightforward: If elected, how would they get the attention of the provincial government for capital projects?

Incumbent Kathleen Karpuk spoke first, introducing a common theme that many candidates touched on — SD73 needs to work alongside the City of Kamloops and other local stakeholders to attract capital funding.

“I would really like to engage city council a lot more, having them come to the table and lobby with us,” Karpuk said.

“Because if we don't have the support — the overt support, the explicit support — of our city council and our neighbouring communities then this is an issue, we won't get schools.”

John O’Fee, another incumbent trustee, said the current board has used every resource at its disposal — and now the only option is building new schools.

“We have seas of portables at all of our schools," he said.

"Our case has never been stronger."

Karla Pearce, a local artist seeking a trustee seat, said she agreed with the rest of the candidates and called her peers “super smart” before offering a solution from what she called an "artistic point of view."

“If that doesn't work, you can always do creative campaigns that will sort of shame the government into doing some action,” Pearce said.

“And that can be done with in other ways — by taking videos and things and really showing it quite publicly [that] this is what's going on here.”

When the topic of SOGI-123 inclusivity and gender-neutral washrooms came up, many in the room awaited the answer of candidate Jennifer Rowse, who's openly campaigned on a platform opposed to SOGI-related measures.

Rowse acknowledged SOGI-123 aims to create an inclusive and safe environment for students of different sexual orientations and gender identities, but said she saw no value in that at this time. Instead, she said education officials should focus on school overcrowding.

“Some schools are targeted to reach 170 to 180 per cent capacity for the next few years. We need to ask ourselves, where's the safety in that? Why is that not the top of our safety concerns for our children?” Rowse said.

“My priorities may be controversial, but I make no apologies for that.”

O’Fee, who was sitting next to Rowse, appeared very passionate about the topic in response to Rowse’s answer to the SOGI question.

“Schools have to be a safe place for all students, including gay students — and if you think you don't have any in your school, you’re just deluding yourself, they're there,” O’Fee said.

“They deserve to be treated with the same respect as everybody else. They have human rights because they're human beings.”

O’Fee’s response prompted an enthusiastic applause from the crowd, despite the audience being asked not to clap during the forum. Rowse's statement moments earlier elicited loud cheers from a smaller portion of those in attendance.

Marian Anderberg, a social worker running for trustee, spoke in great support of the curriculum, and described it as a big help for certain students.

“I deal with students who are suicidal because they come from groups that have been historically excluded in our society and I will not stand for that,” Anderberg said.

“I stand for inclusion and ensuring safety.”

“I want to raise my child, personally, in an environment where she knows that she is accepted, welcomed, included and safe, no matter where she goes in school — and that should be a place where she feels that,” Grieve said.

“I think that she should also feel that way about her peers, regardless of how they identify, regardless of their sexual orientation. The same should be true for staff as well.”

A heckler who loudly supported Rowse’s answer to the SOGI question interrupted the forum a short time later, accusing most in the room of being “sex cult perverts.”

The man was asked to leave and police were called. A Mountie could be seen outside the Henry Grube Centre following the forum interviewing SD73 officials. The officer confirmed police were called after the heckler was kicked out.

“In any crowd, you're gonna have people with different views — and they want to express them in different ways,” DPAC chair Chris Ponti, organizer of the event, told Castanet Kamloops.

“And, to me, it wasn't respectful. And that just wouldn't be tolerated in our events and so we got him to leave.”

Despite the interruption, Ponti deemed the event a “great success.”

“A lot of people came out, we got some good information from the candidates," he said.

"We know a little bit more about them and we can make a more informed decision now, and that's important.”