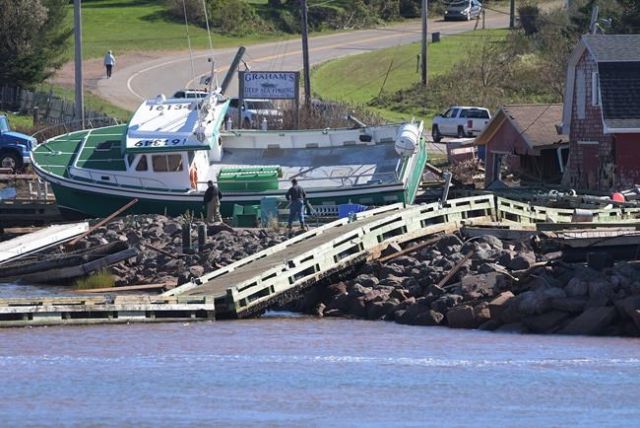 Photo: The Canadian Press
A lobster boat grounded on the rocks at the wharf in Stanley Bridge, P.E.I. on Sunday September 25, 2022. While it’s still too early for overall dollar figures, it’s likely the economic impact of post-tropical storm Fiona will be damaging for areas of Atlantic Canada’s economy. THE CANADIAN PRESS/Brian McInnis

While the damage caused by post-tropical storm Fiona is still being assessed across Atlantic Canada, it’s become clear the economic fallout will be substantial for some parts of the region.

Elmwood, P.E.I., potato farmer Alex Docherty estimates his farm suffered losses of about $500,000 following the weekend's storm. In an interview Monday, Docherty said three of his storage buildings were destroyed by hurricane-force winds, as were the barns of several nearby farmers.

“If a bomb went off, I don’t know whether it would do any more damage,” Docherty, owner of Skyview Farms, said. “On my road within a mile of me there’s nine barns down — you’d swear it’s a war zone.”

The storm made landfall as farmers were getting ready to harvest their potato crops, he said. The ongoing blackouts across many parts of the province, he added, risk causing storage problems because the potatoes need to be kept cool.

Premier Dennis King said that while it’s too early to know the extent of the economic fallout caused by Fiona, it’s expected to be major given the damage to the farming and fishing industries and to a number of businesses, which have been forced to close.

“We will measure it in the millions I’m quite sure,” King said in a briefing Monday.

The premier said there has been significant damage to some mussel and oyster farming operations and he’s waiting to hear about the state of lobster traps. In agriculture, “soybeans and corn took a beating and our apple farms have as well,” King said.

In Sydney, N.S., Marlene Usher, chief executive of the city’s port, said she had to tell three cruise ships on Monday that they shouldn’t come this week. Usher said a total of 12 cruise ships have cancelled their arrivals because of Fiona, for a loss of well over $1 million to the port and various local businesses.

Standing at the reception centre of the port, where electricity had just returned, she said that after several poor seasons due to COVID-19, it’s hard to lose more customers in the prime fall season when ships come to the harbour with thousands of tourists.

“The Port of Sydney’s main revenue generator is the cruise ships … we were already in a serious situation in terms of revenues and reserves at the port. We manage our costs, but this puts us in a precarious situation,” Usher said.

Andrew Prossin, the owner of a small, 100-passenger vessel that tours Sydney harbour, said in an interview that his business has also taken a hit. “All the local tour operators are standing by, and that in and of itself is tough … to keep the engines idling. There will be an impact from the loss of the key business this time of year.”

Usually, the most profitable time of year for marine tourism is September and October, Prossin said, adding that between 60 and 70 per cent of his revenues comes in those months.

In a video news conference Monday, Nova Scotia Premier Tim Houston said it’s anticipated the economic damage from Fiona will be greater than previous storms. Houston also announced about $40 million in provincial aid to people directly affected by the storm.

"Disaster relief funding will be helpful for uninsured losses, but we know this may take time and there will be gaps,” the premier said.

Paul Kovacs, executive director of the Institute for Catastrophic Loss Reduction at Western University, said the benchmark for destruction in the region is the $200 million worth of insurable losses caused by hurricane Juan in 2003.

Kovacs believes it’s time there was a conversation involving governments about what can be done to better prepare for increasingly violent storms linked to climate change. He said research has shown that building stronger, wind-resistant homes, for instance, can make a difference. Kovacs said the state of Florida changed its building code 15 years ago to impose tougher construction standards.

Kovacs said it can be relatively inexpensive to strengthen the connection of a roof to a wall or of a foundation to a wall while constructing a new home. “Lets start preventing the damage,” he said. “Let’s spend the money upfront so we avoid the damage down the road.”