Couple proceeds with wedding amid chaos in P.E.I. from post-tropical storm Fiona 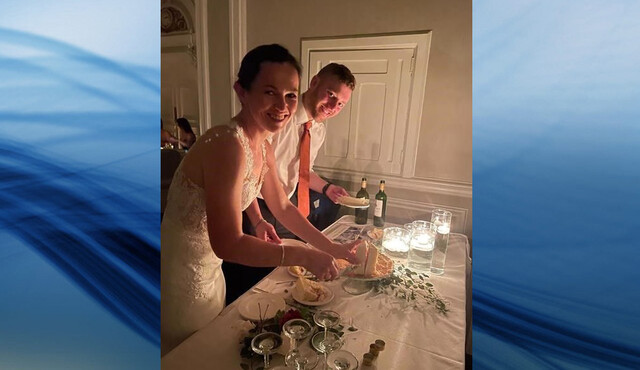 Photo: Sarah Haberl
Naomi and Tyler Wheeler pose for a photo at their wedding in Charlottetown

Naomi and Tyler Wheeler have lived through a pandemic, wildfires, heat waves, minor earthquakes and most recently a post-tropical storm that laid waste to huge swaths of Atlantic Canada.

As the former hurricane Fiona pounded Prince Edward Island on Saturday, devastating much of the province, the couple pledged to weather storms — and any other apocalyptic events life sends their way — together.

In front of just 16 guests, down from the 85 they'd hoped to entertain, the Wheelers professed their love for each other and exchanged rings at the Rodd Charlottetown hotel in the capital city's downtown core.

The couple officially tied the knot in Halifax in 2017 in a small ceremony and decided to have a party later.

“We tried to schedule it three times,” Naomi Wheeler said with a laugh. “And then COVID kept getting in the way. Of course, a hurricane happens when we reschedule.”

The couple live in the bride's California home town, while the groom hails from Montague, P.E.I. They wanted to have a party for Tyler Wheeler's family and other friends who wouldn’t be able to make it to Los Angeles.

They landed in Charlottetown Wednesday when Fiona was churning its way through southern waters. But as the storm approached Canada and warnings grew stringent, their friends cancelled. The couple was disappointed but understood. They wanted their friends and family safe.

“There was the whole stages of grief about it,” Tyler Wheeler said. “We're just kind of in disbelief that this could happen.”

The couple then simply decided to go with the flow, said the bride.

“The flow is just a hurricane.”

The wedding was delayed by an hour-and-a-half while the officiant, Sarah Haberl, and the groom helped patch up a family member’s roof. The Wheelers first met as students at a 2013 party in Montreal. Later that evening, the pair recognized each other at a club where they had gone to act as “wing people” for friends.

“We were terrible wing people,” said the bride.

Nine years later, as Fiona raged, the couple finally celebrated their love and friendship with their closest friends in a storm-adapted ceremony they said was sprinkled with personal touches.

The room was lit with 30 candles and three iPhone flashlights. The invocation and vows were read by candlelight and a headlamp, Haberl said.

The ceremony included a poem, a little bit of the childhood of the couple and had some “lovey-dovey things,” she said.

The rings the Wheelers eventually exchanged were first passed around the room so guests could offer a blessing on them.

The raspberry and vanilla swirl cake was topped with fresh flowers and made by the groom’s sister-in-law.

One of the first songs partygoers danced to was the well-known sea shanty ‘Barrett’s Privateers.’

“We had to get a little bit of Nova Scotia in there,” the groom said.

Amid the celebration, the couple said there was a touch of sadness because the groom’s grandparents couldn't attend.

Reflecting on their ceremony and the past few whirlwind days, the bride said they didn’t realize how fast and how bad things could get with the weather. But Naomi Wheeler said she also feels overwhelmed by the amount of support she got and how everyone came together.

“I think we embraced it. It was a lovely, lovely, cosy, intimate evening,” she said. “I feel very loved.”