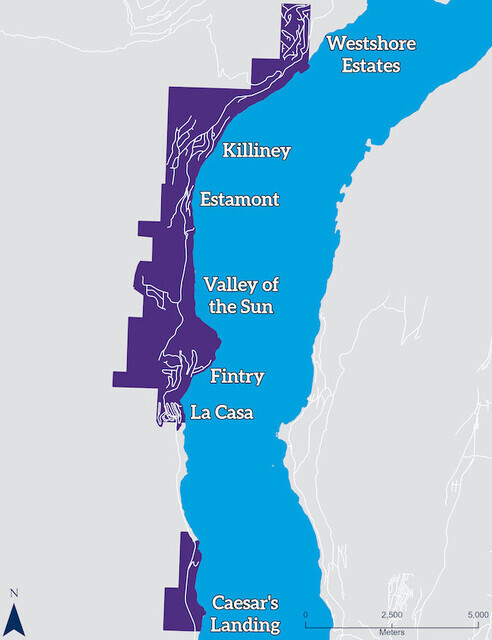 A lengthy governance review of the North Westside of Okanagan Lake has made just one recommendation.

That recommendation is part of a 140 page report to be presented to the RDCO board on Monday.

The governance study was undertaken by Neilson Strategies with a $60,000 grant obtained through the provincial government in response to general dissatisfaction with how the area is governed.

The areas, including Westshore Estates, Killiney Beach, Upper Fintry, Fintry and La Casa, extending south to Caesar’s Landing, while part of the RDCO, have over the years openly lobbied to be self-governed.

The communities north of Fintry in particular are more economically and culturally tied to Vernon rather than Kelowna.

The North Westside Study Committee said it made the single recommendation based on feedback it received after discussions with members of the community.

The recommendation in full, states:

The committee concluded it believed making one single recommendation would best serve the community, and more effectively communicate the top priority.

The RDCO board will be presented with the full 140-page report on Monday.

While some members of the community have pushed for incorporation of the North Westside into a distinct municipality, the report found the region's tax base makes that unfeasible.

"The option (incorporation), however, is typically only suggested for communities that meet a number of criteria considered essential for municipal sustainability. One criterion is a diverse tax base, with a commercial core and non-residential assessment that can be used to spread the local property tax burden beyond residential properties. The tax base in the North Westside today is not diverse."