Skinny bug a type of wasp 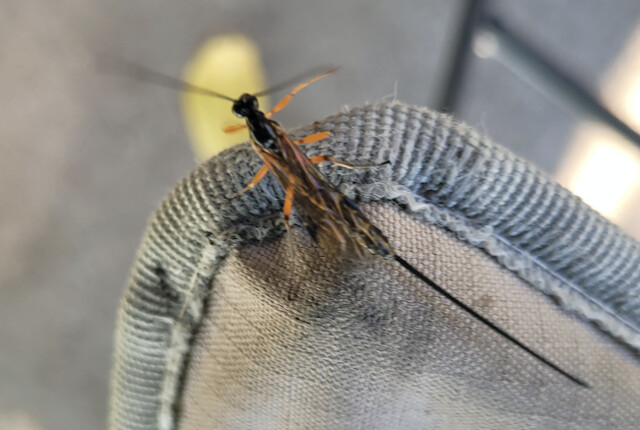 Today's mystery bug has been identified.

Several readers said the bug in question is an ichneumon wasp, of which there are thousands of species.

But you need not be afraid of being stung by an ichneumon wasp because they do not have a stinger. The females have a large ovipositor for laying eggs, but it is not able to sting.

And while they are harmless to humans, other critters are not so lucky.

The female ichneumon uses her ovipositor to inject eggs into a host’s body — usually a grub, caterpillar or pupa.

As the eggs hatch they devour their host from the inside, pupate and emerge to carry on the circle of life.

Ichneumon wasps do not lay eggs in humans.

Today's bug of the week is not very large, nor is it scary.

But it is kind of odd looking.

“I just came outside and this bug landed beside me,” Kristy said in an email. “I have never seen it before nor did it stay very long for me to admire.”

The flying bug has a long, slender body and was spotted in the North Okanagan recently.

The question is, what kind of insect is it?

An internet search for 'flying insect with a long abdomen' turns up all sorts of weird-looking bugs.

The critter spotted in the North Okanagan resembles a Mayfly.

Do you agree? Send me an email on what you think the critter is.

If you have had a close encounter of insect kind, send me a picture at [email protected].