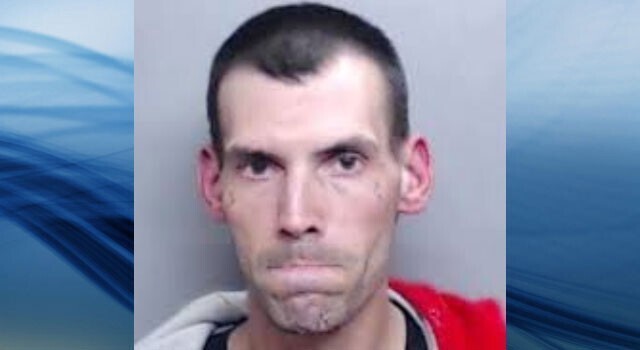 A Penticton man is facing many years behind bars after stealing multiple vehicles and threatening civilians and cops alike.

Jesse Wayne Shawcross, 39, has been behind bars for three years. Rather than pursue a trial, he recently decided to plead guilty to a days-long crime spree that involved thefts, violent threats and car-jackings in the South Okanagan.

On Sept. 16, 2019, a vehicle was stolen from a Penticton apartment parking garage, with two suspects caught on camera.

Three days later, a private security officer at another Penticton apartment on Duncan Avenue called RCMP to report alarms blaring and the sound of glass breaking in the parking garage. He confronted a suspect, who pepper-sprayed him and ran.

Surveillance videos would later show this suspect to be Shawcross.

On the same day, a Harley Davidson was stolen from another underground parkade, along with a distinctive riding helmet, later caught on camera being worn Shawcross as he attempted to use stolen ID and a credit card at a store in Oliver and one in Okanagan Falls.

Shortly before 3 p.m., a driver on Eastside Road between Okanagan Falls and Penticton noticed Shawcross with a crashed motorcycle, holding his stomach as though injured.

The man pulled over to try and help, and Shawcross pulled out what appeared to be a gun, physically forcing the man against his truck and demanding his wallet.

The man refused, and when Shawcross hopped into his truck to start rummaging around, the man ran out into the road in an attempt to flag down help.

Shawcross ran to the vehicle with the woman in it, who pleaded for mercy, saying "I have my kids in the car, please let me go."

Shawcross then ran to the other car, pointing his weapon at the man and shouting "Give me your f*cking car or I'll blow your f*cking head off."

The man said "take it," and Shawcross drove away. He later recounted that Shawcross appeared injured.

Blood on both men's clothing transferred during the altercations was positively determined to be Shawcross'.

For several days, Shawcross was in the wind, as police collected evidence and spoke to witnesses.

Then, on the morning of Sept. 24, a police officer recognized Shawcross driving a Subaru she quickly determined had been reported stolen.

The officer informed other police of the direction of Shawcross' travel. Later that morning, a blue Subaru matching the description crashed in Okanagan Falls, and a witness noted a man later determined to be Shawcross leaving the car and immediately stealing a nearby Chevrolet.

Shawcross then stole another van, also noted by a witness, and ended up in Penticton at the Canadian Tire parking lot, where he was once again observed and police called.

When police converged, he attempted to crash his vehicle through the middle of the parking lot, damaging several parked cars, then fled on foot.

Ultimately, he was tackled at the Petro Canada gas station nearby, screaming obscenities and threats while continuing to resist arrest.

"I'm going to put you in a body bag when I get out," police recount Shawcross stating while being taken into custody.

"I will kill your kids, I will kill your whole bloodline," he said, among other graphic threats of violence against specific members of arresting and investigating officers' family.

Crown counsel Devji asked the judge for a sentence of 8-9 years, noting Shawcross' long rap sheet and lack of proof that rehabilitation has worked for him in the past.

“He slides back into using [drugs and alcohol] and criminal behaviour quickly … At this point, despite lengthy periods of time in custody and community support, and while completing various programs while in custody, he has struggled to transfer that into the community or the world that he is released into.”

Shawcross' counsel argued for a lighter sentence in the five-year range, pointing to Shawcross' tragic history of childhood abuse, struggles with substances, Fetal Alcohol Spectrum Disorder, and plans to attend a residential treatment centre upon release.

"He has insight into his problems and when you're looking at addiction and you're looking at the road to recovery, the first step on that road to recovery is acknowledging that you have a problem. The second step is taking steps in order to address that problem, I would respectfully submit that Mr. Shawcross is on the second step," his lawyer Jordan Watt said, adding Shawcross is "remorseful" for his actions including the violent threats he made.

Shawcross himself read aloud a tearful statement of regret to the court, referencing his painful childhood, loss of the only parent figures in his life, and emphasizing that all he wants now is to make up for past actions and move forward.

"As we move forward, I'd like to be a part of the healing process [for the individuals impacted]. I am more than willing to participate in any healing from my actions," Shawcross said.

"I need to focus on getting myself healthy and out of this cycle of pain."

Shawcross has a girlfriend who is also in recovery from addiction who he says he hopes to reunite with after their respective recovery journeys.

Provincial Court judge Richard Hewson heard from both sides all day Friday, and decided to sit on his final sentencing decision until a later date.

Lawyers will meet on Sept. 29 to fix a date for the conclusion of the sentencing hearing, expected to take one hour.

The judge will have final say on Shawcross' sentence.